Giant Monitor Lizards Are Out of Control in This Bangkok Park

A monitor lizard is pictured at Lumpini Park in Bangkok on Sept. 20, 2016
Athit Perawongmetha—Reuters
By Tekendra Parmar

Nearly 100 monitor lizards have been removed from Bangkok’s Lumphini Park.

Much like Central Park in New York City, Lumphini is a rare 142-acre oasis in the heart of the Thai metropolis where city dwellers can jog, bike, rent paddleboats and picnic away from the cacophony of city life.

Park officials told the Bangkok Post that the population of lizards — who have long made the park their home — have soared out of control, with about 400 lurking around the park’s ponds and canals.

According to the Post, some of the reptiles have grown to upwards of 10 ft. (3 m), have damaged much of the park’s flora and frightened many visitors. The lizards, however, are not dangerous to humans, eating mainly dead fish, turtles and birds.

Officials said the lizards will be relocated to a wildlife sanctuary in a nearby province, but some will be left in the park as their presence draws many visitors, including foreign tourists.

Some people in Thailand believe the monitor lizard, or hia (a noun that doubles as a curse word in Thai), is seen as a sign of good luck and prosperity, “If a hia goes into someone’s room, they will become rich,” said Tawee Somnamee, a caretaker at Lumphini Park. “There should be some left for foreigners to see,” he added. 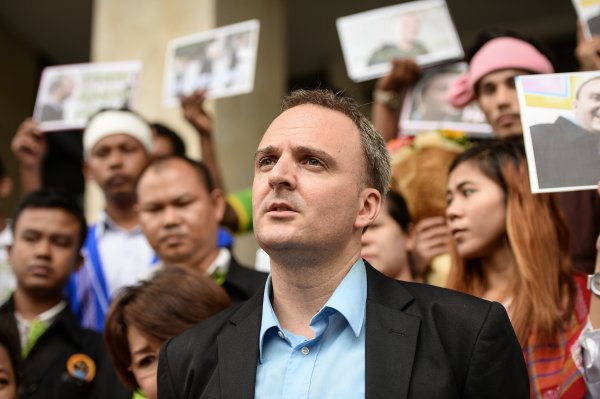 British Activist Found Guilty of Defamation in Thailand
Next Up: Editor's Pick