Where Do Babies Come From? Harmlessly Enjoyable Storks Has the Answer

If you’re one of those people with small children who have been balking at the question of where babies come from, Storks is here to buy you a little more time. In this animated ramble from Warner Animation Group—the outfit that brought us The Lego Movie, with its criminally unshakable “Everything Is Awesome” anthem—Andy Samberg provides the voice of Junior, a gregarious, principled stork who doesn’t deliver babies. That’s because Storks takes place in a universe where these leggy flying wonders have opted out of the baby-delivery business: They now spend their days dropping off the oodles and oodles of stuff that human beings order from mega online retailer Cornerstore.com, presumably because it’s a more headache-free and profitable line of work, but also partly because of a semi-scandal involving a stork who, long ago, became too attached to a baby he was supposed to deliver.

That baby, Tulip (voiced by Katie Crown), is now grown up—the only human among the storks, she’s a ditzy live wire with a mess of curly red hair—and she’s Cornerstore.com’s clumsiest, most accident-prone employee. Now that she’s 18, company honcho Hunter (Kelsey Grammar) wants to fire her, drafting Junior for the task. In his eminent niceness, Junior hesitates, and as the result of this delay, Tulip inadvertently activates the company’s long-dormant automatic babymaking machine. It plunks out an adorable infant with enormous, blinking fawn eyes, destined to be the baby sister of Nate Gardner (Anton Starkman), a semi-neglected kid whose busy parents (voiced by Ty Burrell and Jennifer Aniston) have resisted his pleas for a sibling.

But how to deliver this gurgling bundle of joy, now that storks have moved onto a more lucrative livelihood? That’s the problem Junior and Tulip must solve, and the obstacles in their path include a brown-nosing pigeon (his name is Pigeon Toadie, and he’s voiced by Stephen Kramer Glickman) and a pack of baby-stealing wolves that can, collectively, contort themselves into useful shapes like that of a suspension bridge, a submarine, or an SUV. Directed by Nicholas Stoller (Forgetting Sarah Marshall, Neighbors) and written by Stoller and longtime animator Doug Sweetland, Storks is harmlessly enjoyable, particularly when it’s just riffing on noodly ideas like those teamwork-obsessed wolves. Asking us to care much about Tulip, a grinning, babbling annoyance, is a wolf bridge too far. And as with most animated films today, there’s lots of boring bromides about “family” and “belonging” that you have to suffer through to get to the good stuff.

In fact, there’s no getting away from the fact that the wolves are the best part of Storks, particularly two lean, shaggy fellows, named Alpha and Beta, voiced by Keegan-Michael Key and Jordan Peele. When they first meet that scrumptious little dumpling in a diaper, you know what’s on their minds, and they argue over who’s going to get the first bite. But just as they move in for the kill, they realize she’s just too adorable to eat. Instead, they lick her: Their tongues tickle her face with sloppy, feathery strokes. It’s a moment of loopy lupus ridiculousness, and for an instant you wonder why being raised by wolves is generally considered a bad thing. Beyond that, nothing in Storks is revelatory—except for that babymaking machine. Why didn’t anyone ever tell me? 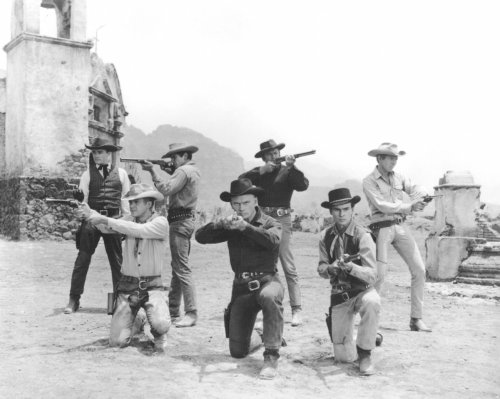 The Original 'The Magnificent Seven' Wasn't Actually Original Either
Next Up: Editor's Pick