On Tuesday, Angelina Jolie filed for divorce from Brad Pitt, her husband of two years and partner of nearly 12 years. Tabloids have always fixated on the couple, but Brangelina continued to raise their six children, participating in humanitarian projects and even making wine together at their French chateau. Oh, and the movies — they’re actors, after all.

Let’s take a look back at all of Brangelina’s most important moments.

Summer 2004: Brad Pitt and Angelina Jolie start filming Mr. and Mrs. Smith, a steamy action-comedy movie about two (married) spies. Due to scheduling conflicts, they hadn’t met before filming their first scene. At this point, Pitt and Jennifer Aniston had been married for nearly five years, while Jolie was still considered a wild card with unusual taste. (Fun fact: in a recent revelation, Gwen Stefani shared that she auditioned for the role of Mrs. Smith. “I feel like I almost got it,” she said, leading us to imagine that in another universe, Brangelina didn’t even happen.)

Summer 2005: As they make the publicity rounds for the premiere of Mr. and Mrs. Smith, rumors ramp up, culminating in a sultry “Domestic Bliss” photo shoot with W magazine featuring the two playing house. But nothing is confirmed; Pitt’s divorce is not yet complete.

Fall 2005: Pitt and Aniston’s divorce is finalized in October 2005. In November, Jolie, a UNHCR Goodwill Ambassador and active humanitarian, heads to Pakistan to participate in earthquake relief efforts — and Pitt is snapped accompanying her on the aid trip.

Winter 2006: It’s well and truly on: Jolie confirms to People that she is having a baby with Pitt. Soon after, he legally adopts Maddox and Zahara Jolie, her two adopted children, and they change the children’s last names to Jolie-Pitt.

May 2006: Their daughter, Shiloh Nouvel Jolie-Pitt, is born in Namibia.

October 2006: Despite their growing brood, Pitt insists that marriage is not their goal, telling Esquire that they will only tie the knot “when everyone else in the country who wants to be married is legally able,” prompting same-sex marriage advocates to applaud the two.

January 2007: The couple are spotted setting up shop in a historic 1830’s mansion in New Orleans’s French Quarter, which they will call home as Pitt works on his Make It Right project to rebuild the city following Hurricane Katrina. He first became involved in New Orleans while shooting the award-winning Curious Case of Benjamin Button.

May 2008: Jolie reveals she’s pregnant with twins when then the couple appears on the red carpet at the Cannes Film Festival. (She’s promoting Kung Fu Panda at the time, a franchise she will remain involved in for the foreseeable future.) In 2008, they also sign a long-term lease on a French château, where they begin spending time regularly.

July 2008: Twins Vivienne Marcheline and Knox Léon are born in France. The exclusive first photos of the twins are sold for $14 million to People and Hello!; it’s the costliest set of photos sold in tabloid history at that time.

September 2011: While on press tour for Moneyball, Pitt is quoted in Parade as saying that during the end of his relationship with Aniston, he was “trying to pretend the marriage was something that it wasn’t,” and that meeting Jolie was reinvigorating for him.

December 2011: In an interview with Christiane Amanpour, Jolie mentions that her children keep asking about when their parents will get married. “We’ve explained to them that our commitment when we decided to start a family was the greatest commitment you could possibly have. Once you have six children, you’re committed,” she said. A month later, Pitt tells the Hollywood Reporter that wedding bells might be in their future: “But I don’t think we’ll be able to hold out. It means so much to my kids, and they ask a lot. And it means something to me, too, to make that kind of commitment.”

April 2012: The two announce they are engaged to be married. “It is a promise for the future and their kids are very happy. There’s no date set at this time,” Pitt’s manager told People.

March 2013: The couple debut their wine, an award-winning rosé, which is made at their 1,000-acre vineyard and named after their home of Chateau Miraval in Correns, France. All 6,000 bottles sell out within minutes, and it is later named a top vintage by Wine Spectator.

May 2013: Jolie writes an op-ed in the New York Times sharing her choice to undergo a double mastectomy, citing genetic predispositions towards breast cancer. “I am fortunate to have a partner, Brad Pitt, who is so loving and supportive,” she wrote. “Life comes with many challenges. The ones that should not scare us are the ones we can take on and take control of.”

August 2014: Finally, in a private, secret ceremony at their chateau, Brad and Angelina formalize their union with a wedding attended by a small number of guests and their six children.

December 2014: The two actors appear together on the big screen again — but this time, Jolie wrote and directed the film. Critics didn’t love By the Sea, a melancholy meditation on a disintegrating marriage. “Sharing something in a deep artistic way, it’s something I think is necessary for artistic couples,” Jolie said at the time. “I hadn’t realized how good it would be for us.” Jolie’s World War II movie Unbroken would also premiere that month.

May 2015: After spending eight years with their New Orleans house, Brad and Angelina decide to say goodbye to their French Quarter home, listing it for $6.5 million and dropping the price nearly $1 million just six months later when it fails to sell.

September 2016: Pitt is profiled by writer Marlon James for the New York Times. In the story, James pointedly avoids discussing Pitt’s marriage or family life. “Maybe Brad Pitt is a regular guy,” James concludes after spending time with the actor, who has several upcoming films to promote: romantic thriller Allied and War Machine. “He seems more like the Dude than a dad.”

Sept. 19, 2016: Jolie files for divorce. In a statement, Pitt told People that his focus is on the “well-being of our kids.” 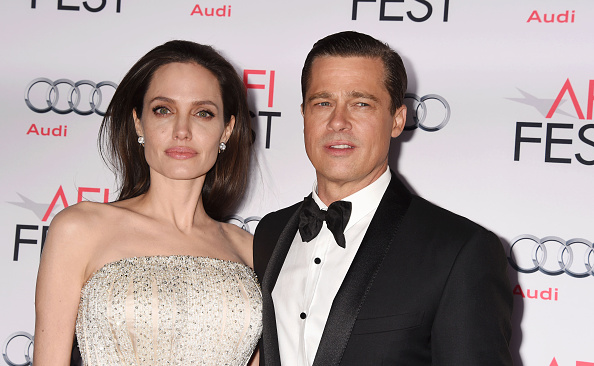 The Internet Is Losing Its Mind Over the Brad Pitt-Angelina Jolie Divorce
Next Up: Editor's Pick