Greek Anarchists Are Finding Space for Refugees in Abandoned Hotels

The reception desk at the City Plaza business hotel is manned by a rotating staff of international volunteers who help refugees from Syria, Iraq, Afghanistan and African countries with everything from lost keys to bus routes, school applications and medical appointments with volunteer doctors.
Lynsey Addario—Getty Images Reportage for TIME
By Aryn Baker / Athens

Shirine Othman, a 20-year-old refugee from Syria now living in Athens, can’t say enough good things about where she has ended up living. She bustles around her small room, pointing out the wall-mounted hairdryer, then bounces briefly on the bed before smoothing out the polyester coverlet. She enthuses about the spacious closet and the anodyne wall art on her one-minute tour, then says she has saved the best for last.

When Othman, her husband and their two children arrived in Greece in March, after a terrifying night crossing from Turkey in a rubber boat, they were shunted into one of the country’s vast outdoor refugee camps. There they spent several weeks battling the cold, mud and rain in a tiny camping tent. Othman, seven months pregnant at the time, found herself sprinting for the distant portable toilets several times a night. Because of her pregnancy, Othman was able to apply for special permission to relocate to Athens, where she found something much better. “What I love about this place is that I have my own room. I can close the door, and be alone with my family,” she says, ducking into the tiny en suite. She beams in front of the mirror: “And we have our own bathroom.”

Few visitors to the downmarket City Plaza business hotel in downtown Athens would give the basic amenities such rave reviews. But for the refugees that have made it their home over the past six months, it is a virtual paradise compared to the grim conditions of the government run camps that house most migrants.

It is also technically illegal.

Part of the hotel’s dining room has been turned into an activity center for refugee youth to gather for games, language tutor sessions and hanging out.
Lynsey Addario—Getty Images Reportage for TIME

Like many other Greek businesses, the City Plaza Hotel shuttered its doors in 2010 in the wake of the European financial crisis. But on April 22, 2016, a ragged consortium of Greek anarchists, leftists and international volunteers calling themselves the Solidarity Initiative for Political and Economic Refugees broke the locks, reconnected the utilities, cleaned up the rooms and occupied the building. Then they opened it up to 400 refugees fleeing wars in the Middle East, Africa and Afghanistan.

Some 60,000 Middle Eastern and African refugees are currently stuck in Greece, the second act of a crisis that riveted the world when more than a million migrants crossed the Mediterranean by boat last year seeking a better life in Europe. In March Turkey signed a deal with the European Union, agreeing to stop the traffic to Europe in exchange for more than $6 billion in financial incentives. At the same time, Macedonia shut its border with Greece, trapping those who had made it out of Turkey, but not yet into the destination countries of Western Europe, in place while they wait for resettlement.

The Greek government—still grappling with its own economic woes—has responded by establishing tented camps to house them. The facilities are basic, built on unused tracts of land far from the city center or in abandoned agricultural warehouses. They are not supplied with hot water, there are no schools or playgrounds for the children, and they rarely have adequate shower facilities or even flush toilets.

Solidarity activists back in Athens say that they have a solution. “The international system of housing refugees isn’t working,” says Nasim Lomani, a 35-year-old Afghan member of Solidarity who came to Greece 16 years ago as a refugee. As a result of the financial crisis, he says, “there are at least 11 million empty buildings and houses in Europe, and 4,000 in Athens alone. They could be used for housing refugees in much better conditions; treating them like humans, and not caged animals.”

Baida, 27, from Raqqa, Syria, keeps an eye on her three children as they play in her family’s room at the hotel. Her youngest son, 7-year-old Ahmed, has cerebral palsy and cannot walk. He has a wheelchair, but because the elevators are not working in the eight-floor building, the family keeps the wheelchair downstairs in the lobby.
Lynsey Addario—Getty Images Reportage for TIME

City Plaza is run like a cooperative, with residents taking up weekly responsibilities based on their individual capacities, from cooking meals to cleaning, group child care, and basic maintenance. (Which can be limited—the elevators in the eight-story building are turned off, because none of the refugees currently living there knows how to maintain them.) Volunteers help out with medical clinics, administration and ad hoc activity classes. One recent week’s line up promised sushi making, English conversation, yoga, kids movies and a nightly women’s dance party up on the rooftop terrace.

“We don’t want to be ‘good guys’ helping the poor refugees. We want to organize this place so the refugees can do things for themselves,” says Lomani. That self-reliance is an essential part of giving refugees the dignity and purpose they crave as they attempt to forge a new life in Europe, he says. “Among the refugees you can find engineers, doctors, teachers, cooks, and translators. Is it fair to put several thousand of them together in a horrible group camp, inside tents, with no jobs and nothing to do, and then ask why they are complaining and fighting?”

Women who made it out of some of the world's worst conflicts, like Syria and Afghanistan, cook alongside one another in the industrial kitchen of the City Plaza hotel.
Lynsey Addario—Getty Images Reportage for TIME

Reema, a 25-year-old mother of three from Homs who asked not to use her full name for fear of endangering family still in Syria, works several hours a week in the hotel’s industrial kitchen preparing meals for the residents. She cooks alongside Kurds, Afghans and Iraqis in the kitchen, and they all say that it’s one of the best things about living at City Plaza. In the camps the military and catering companies provide meals for the refugees, but they are often poor quality, or made from unfamiliar ingredients.

At City Plaza, says Reema, “We can cook our favorite foods. A taste of home helps with missing it so much.”

So far, the Solidarity movement has occupied nine empty buildings in Athens, housing around 1,500 refugees. Lomani expects the numbers to rise as winter weather forces even more refugees out of the camps, which often turn into muddy swamps in the rain. “City Plaza is not the solution for the refugee crisis,” he says. “But it is a good example of how to do it better.”

City Plaza’s owner, Aliki Papahela, thinks differently. The former Greek stage actress has appealed to the courts to force an evacuation. So far, she has seen little progress—Greek Prime Minister Alexis Tsipras’ Syriza Party is reluctant to alienate its supporters on the far Left, especially when it comes to the fraught issue of refugees. Aliki doesn’t blame the refugees—in fact, she muses, they probably don’t even know that they are living in a contested building. If the government or the United Nations High Commissioner for Refugees wanted to rent City Plaza from her to house refugees, she says, she would be more than happy to oblige.

Refugee residents of the hotel organize a women-only dance party several nights a week on the rooftop terrace. It’s an opportunity for the women, many of them conservative Muslims from Syria, Iraq and Afghanistan, to relax, take off their headscarves and smoke hookah without worrying about prying male eyes.
Lynsey Addario—Getty Images Reportage for TIME

She was in the process of selling the hotel when it was taken over, she says, but now that it’s been turned into a squat, that’s impossible. Meanwhile she can no longer afford to pay the property taxes and fears that the hotel, an inheritance from her late father, will soon be taken from her. “I do believe that refugees have the right to a decent life, and until they find it, we must support them,” she says.

But not at the cost of ruin. Aliki likens her situation to that of Greece as a whole, forced to support an unfairly large share of Europe’s refugee burden. “This is not just about me. It’s about the whole of us Greeks. If someone can come into someone’s house and take it over because he thinks it’s better to give it to refugees, and because of that you have to stay poor and become a refugee yourself, well, don’t you understand that in one or two years there will be nothing of us left?”

— With reporting by Lamprini Thoma / Athens 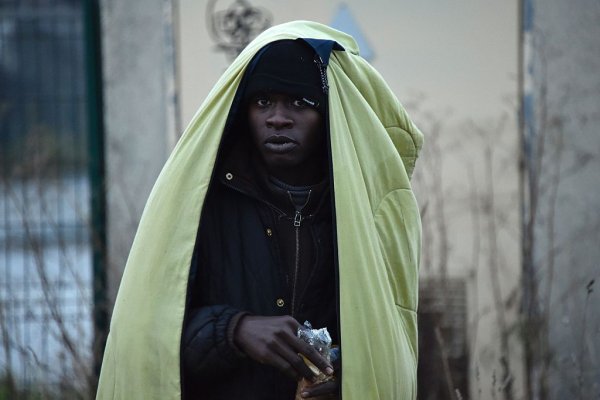 These 5 Different Camps Tell the Story of the Global Refugee Crisis
Next Up: Editor's Pick