Hillary Clinton’s recent bout of pneumonia became the obvious punchline for Jimmy Fallon when the Democratic presidential nominee was guest on the Tonight Show Monday night.

Fallon donned a surgical mask and made ample use of the hand sanitizer when he welcomed Clinton to the show. She took it in her stride and laughed the health references off.

“I’m not contagious,” Clinton said. “I’m used to just getting up and powering through it, and that’s what I thought I could do. Turns out I couldn’t.”

Fallon asked her whether she dreamed of being President in her childhood.

“It wasn’t even within the realm of the possible for little girls back then,” she told the host. “That’s what’s so exciting about this campaign.”

“We have slowly but steadily knocked down all the barriers,” Clinton said. The pair also talked about the upcoming first presidential debate and her rival Donald Trump’s behavior on the campaign trail.

Fallon gave Clinton a paper bag that he said was left by Trump when he appeared on the program last Thursday, reports PEOPLE

It contained a framed photo of Russian President Vladimir Putin, a CD of Pink Floyd’s The Wall and a bag of softballs. (Fallon’s most recent interview with Trump was widely panned for being too soft with the questioning.) 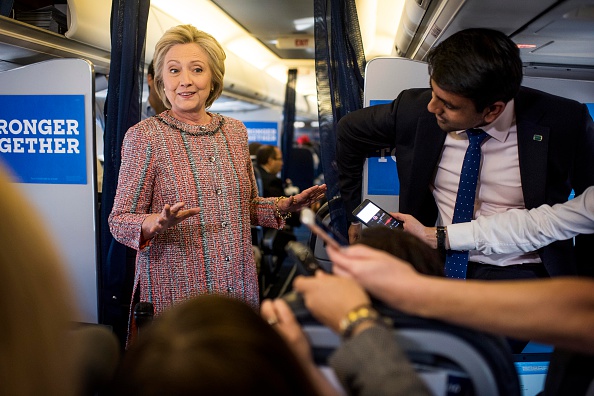