The Baby From Nirvana's Nevermind Is 25 Now

Spencer Elden was just a few months old when his parents got a call from underwater photographer Kirk Weddle, who asked if he could use their newborn baby as part of a photoshoot for an up-and-coming band called Nirvana. At the time, Elden’s father helped with sets, custom rigging and props for photo shoots, which is how he got to know Weddle.

Initially, Weddle tried to photograph babies at a swimming class, but none of those images fit what Geffen Records was looking for, so they wound up choosing one of the stills that Weddle took of Elden. Later on, a fish hook with a dollar bill was eventually added, to make it look as if the baby was swimming towards it. Elden’s parents were reportedly paid only $200, and the shoot lasted around 15 seconds.

Last year, Weddle told TIME, “It was a great concept—a baby underwater, unable to breathe, going after money on a fishhook. After Nevermind was a big hit, they came back to me to shoot the band underwater.”

After the album’s surprisingly successful release, the image would go down in music history as one of the most recognizable album covers of all time, along with Pink Floyd’s Dark Side of the Moon and the Beatles’ Abbey Road.

“Looking back, it feels kind of stupid doing interviews about it, because I had nothing to do with it, but a lot to do with it all at the same time,” says Elden, now 25. “It’s a really weird feeling being a part of someone else’s momentum—being caught up in this wake of stuff.”

Today, Elden lives in Los Angeles with his mother and focuses on making art and growing tomatoes. Over the past few years, his interest in art has developed after he interned for street artist Shepard Fairey, who has acted as a mentor. But Elden is still trying to figure out how he feels about Nevermind. “It’s a trip. Everyone involved in the album has tons and tons of money. I feel like I’m the last little bit of grunge rock,” Elden says, “I’m living in my mom’s house and driving a Honda Civic.”

Elden has never met the two surviving members of Nirvana, Dave Grohl and Krist Novoselic; he says that previous attempts to contact either musician weren’t successful. In 2013, TMZ asked Dave Grohl if he ever met the baby from the Nevermind cover and Grohl acknowledged that he hasn’t: “I’ve never met him. We weren’t there the day that they did the photo shoot, so I don’t know. I’ve seen him in magazines and stuff.”

Even though Elden has recreated the photo shoot a number of times and has a large tattoo that says “Nevermind” on his chest, he says he hasn’t fully come to terms with being on the album’s cover. “I got a little upset for a bit,” he says. “I was trying to reach out to these people. I never met anybody. I didn’t get a call or email. I just woke up already being a part of this huge project. It’s pretty difficult—you feel like you’re famous for nothing, but you didn’t really do anything but their album.”

Frustrated about never receiving any sort of compensation for Nevermind, Elden recently looked into pursuing legal action against Geffen Records, but was unsuccessful. “It’s hard not to get upset when you hear how much money was involved,” he says. (Nevermind has sold over 30 million copies worldwide.) “[When] I go to a baseball game and think about it: ‘Man, everybody at this baseball game has probably seen my little baby penis,’ I feel like I got part of my human rights revoked,” says Elden.

Though he’s occasionally bitter about the role he played in Nevermind, Elden admits, “I think it’s also me being carried away with it and thinking about it too much.” He likes the album artwork itself, describing the concept as “genius,” but draws the line at merchandising, including puzzles and mugs. “Nirvana’s cool, I guess—it’s just weird being a part of it.” 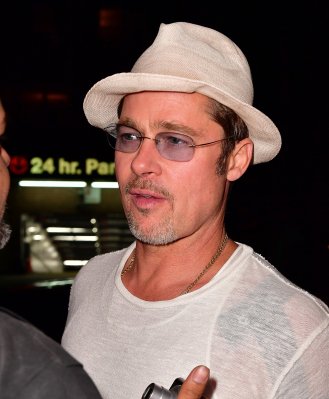 Pitt Incident Was Just Fight that 'Escalated': Report
Next Up: Editor's Pick