Sounding more like a sitting President than a candidate for the office, Hillary Clinton on Monday said the United States will confront the threat of terror with “resolve, not fear.”

The former Secretary of State briefly spoke with reporters before boarding her campaign jet in White Plains, N.Y., and urged Americans to stay strong in the face of bombings in New York and New Jersey over the weekend. The moment was again a reminder of the choice Americans face between Clinton and Republican nominee Donald Trump, a blustery first-time candidate whose rhetoric often borders on belligerent.

“This threat is real, but so is our resolve. Americans will not cower. We will prevail,” Clinton said, adopting a subdued tone more often shown at the White House than on the campaign trail.

But Clinton also had barbs for her rival. As she has done in the past, she cited remarks from the former director of the National Counterterrorism Center, Matt Olsen, who has said ISIS is rooting for a Trump victory, in part, because he is seen as a weaker opponent for Islamic extremists. Clinton said Trump’s speeches against terror have played right into ISIS’ desire to turn America’s fight against terrorism into one against an entire religion.

“The kinds of rhetoric and language that Mr. Trump has used is giving aid and comfort to our adversaries,” Clinton said.

It was a subtle point—one she has made before with different words—but one that she wants to highlight as the countdown clock to Election Day turns to just 50 more news cycles.

Trump’s campaign seized on Clinton’s phrasing of “aid and comfort”—language used in the Constitution to describe treason—to call Clinton “disgusting” and an attempt to distract from her role as Secretary of State during Obama’s first term. “Hillary Clinton’s comments today accusing Mr. Trump of treason are not only beyond the pale, it’s also an attempt to distract from her horrible record on ISIS,” Trump spokesman Jason Miller said in a statement.

Americans’ anxiety is high, and the bombs in New York are only likely to shift their focus away from the political skirmishes of Trump’s taxes and Clinton’s health records and back toward one of the chief jobs of the President, national security. Polls show Americans divided on that question: Trump has the upper hand on fighting terrorism, while Clinton enjoys an advantage on questions of foreign policy, temperament and the ability to be Commander in Chief.

Clinton was ready to remind voters that she has the experience in this real, initially as a First Lady who broke new ground and waded into foreign policy, then as a Senator from New York on Sept. 11, 2001, and then as the nation’s top diplomat.

“I won’t get into classified information, but I have sat at that table in the Situation Room. I’ve analyzed the threats. I’ve contributed to actions that have neutralized our enemies. I know how to do this. I know how we don’t want this to get even bigger than it already is,” Clinton said.

On the practical front, Clinton again called for an “intelligence surge” to prevent attacks before they happen, and continued awareness against potential threats. She called for both greater cooperation between local police and federal officials—a popular request from law enforcement—and called for Americans not to target innocent Muslims.

“We are going after the bad guys and we are going to get them. But we are not going to go after an entire religion and give ISIS exactly what it’s wanting in order for them to enhance their position,” Clinton said.

As Clinton spoke, authorities were searching for a person of interest, an American of Afghan descent, in the dual attacks. 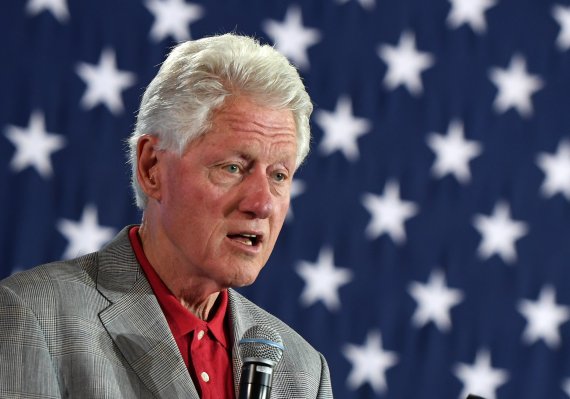 Bill Clinton Says Some People Probably Gave to Foundation to Gain Influence
Next Up: Editor's Pick