Here’s How Diverse the Emmys Actually Were

Rami Malek won Best Actor in a Drama for playing a detached hacker on Mr. Robot, becoming the first non-white actor to win the category in 18 years. By the end of the night, four non-white actors had won acting awards, a slight increase from last year’s three. This year, 24.6% of the acting nominations went to non-white actors, an increase from last year’s ceremony. (That still falls behind the approximately 28.3% of speaking characters on television who were black, Latino, Asian or Middle Eastern in 2015, according to a USC Annenberg report released in 2016.)

The ceremony also gave airtime to presenters and winners like Orange Is the New Black’s Laverne Cox and Master of None’s Alan Yang, whose calls to action championed marginalized groups. Two shows that address race — Master of None and Key and Peele — took home trophies for Best Writing for a Comedy Series and Best Variety Sketch Show, respectively.

As for the leading and supporting actors who won awards, here are five numbers that illustrate, through the prism of the industry’s highest honors, the landscape of diversity on television today.

37 – Years since a non-white actor won an Emmy for Supporting Actor in a Comedy Series. This year, half of the nominees were non-white, and ultimately, Keegan-Michael Key (Key & Peele), Tituss Burgess (Unbreakable Kimmy Schmidt), and Andre Braugher (Brooklyn Nine-Nine) lost to Louie Anderson, who won for his blend of humor and heartbreak as the mother on Baskets.

18 – Years since a non-white dramatic lead actor won. Rami Malek (Elliot, Mr. Robot) is the first non-white winner since 1998 when Andre Braugher took home the trophy for his performance in Homicide: Life on the Street.

9 – Years since a non-white actress won the award for Best Actress in a Comedy. Black-ish’s Tracee Ellis Ross was the first non-white actress to be nominated in this category since 2008, and in 2007, America Ferrera won her Emmy for Ugly Betty. This year, the honor went to Julia Louis-Dreyfus for helming the Emmy favorite, Veep. The last black actress to be nominated in this category was Phylicia Rashad for playing Clair Huxtable on The Cosby Show in 1986.

3 – Non-white actors took home awards this year for their supporting roles in a miniseries. Half the nominees for Outstanding Actor in a Limited Series or Movie, often the most inclusive category, were non-white. Regina King won for her role as Terri Lacroix on American Crime, and she acknowledged the show for exploring mass incarceration in her speech; Sterling K. Brown won for his portrayal of attorney Christopher Darden on The People v. O.J. Simpson; and Courtney B. Vance won for his role as Johnnie Cochran on The People v. O.J. Simpson.

Correction: The original version of this story misstated who won the Emmy for Best Actress in a Comedy in 1986. Betty White won for her role as Rose Nylund on The Golden Girls. 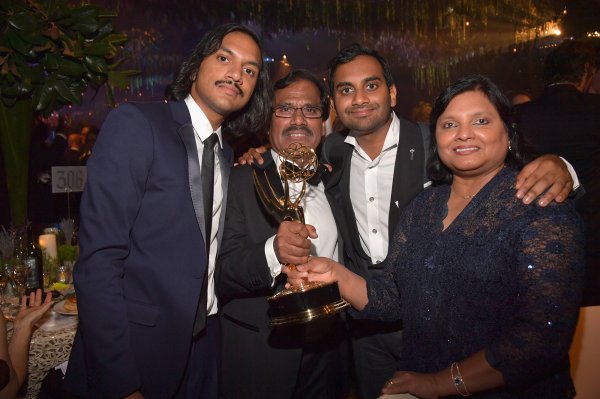