Global leaders gathered Monday for the first of two high-profile days of meetings on the issues of migration and refugees at the U.N. headquarters in New York, where they will attempt to forge a global response to the plight of the 65.3 million people forcibly displaced worldwide.

The U.N.’s first-ever Summit for Refugees and Migrants will see 193 member states adopt a set of non-binding commitments that will be known as the New York Declaration.

Monday’s event comes after the publication of a May report on refugees and migrants by U.N. Secretary General Ban Ki Moon. In it, he called for a global compact to share responsibility in the crisis, in an attempt to help developing countries like Lebanon and Turkey who currently host 80% of the world’s refugees.

“If one lesson can be drawn from the past few years, it is that individual countries cannot solve these issues on their own,” Ban wrote in the report. “International cooperation and action to address large movements of refugees and migrants must be strengthened.”

The U.N. has called the summit a “game changer” that will further enhance the protection of migrants and refugees across the world. “Coming at a time of multiple global crises, and when large-scale movements of refugees and migrants are challenging many countries—even stoking xenophobia in some quarters—it is very significant that 193 Member States of the United Nations are coming together to agree on a way forward to manage the challenges better, together,” UNHCR spokesperson Melissa Fleming told reporters on Sept. 6.

However, during negotiations over a draft declaration in the run up to Monday’s summit, the U.S. quibbled over a section in the draft saying that forced detention is never in the best interests of a child. Western European countries removed a clause obliging governments in the developed world to resettle 10% of the world’s refugees.

Ahead of the event, aid agencies and rights’ groups like Amnesty have said that the meetings and its draft declaration produced little to no concrete pledges to solve the crisis. Furthermore, the summit is expected to fall short of Ban’s hope for a “global compact” on responsibility sharing, and that issue now be will be dealt during the next summit in 2018.

Hopes are now pegged on Tuesday’s Leaders’ Summit, convened by U.S. President Barack Obama, to provide more tangible results. The summit will focus exclusively on refugees and is co-hosted with Ban and countries seen to have done most for refugees, such as Jordan, Mexico, Sweden, Germany, Canada and Ethiopia.

Obama— who last week raised the goal on the number of refugees America will resettle in the following fiscal year to 110,000— will attempt to persuade each attending country to double the number of refugees resettled globally, increase humanitarian aid to refugees by 30% and provide jobs for a million refugees and educational opportunities for a million refugee children. Pledges from private companies on how they will help refugees will also be announced at the summit.

“From Syria alone, nearly 5 million refugees have crossed the Syrian border trying to seek safety from barrel bombs and chemical weapons attacks and terrorist attacks,” Samantha Power, the U.S. ambassador to the U.N., told USA Today. “And all of these individuals, every one of these numbers, is a face and a person with a family. They are facing very uncertain futures and they’re looking to the rest of the world and to the U.N., of course, for help.”

With 21.3 million refugees across the globe, the need for action and not just words has never been greater. 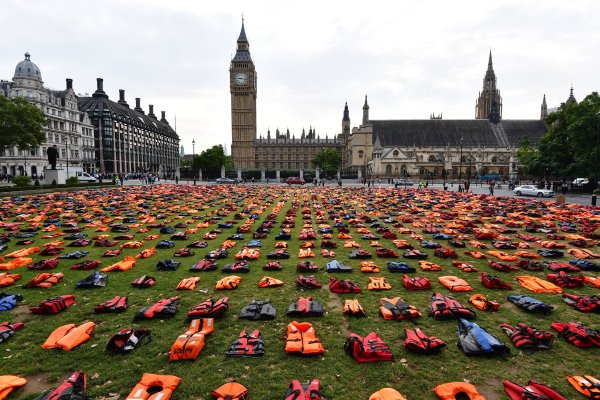