A man who was being sought by authorities in connection to the explosions in New York City and New Jersey over the weekend has been arrested, police said Monday.

Ahmad Khan Rahami, 28, was taken away in an ambulance in Linden, N.J., after he sustained at least one bullet wound in his leg in a shootout with police, Elizabeth Mayor Chris Bollwage told reporters. The suspect is believed to be undergoing surgery, Union County Prosecutor Grace Park said at a news conference in New Jersey.

Rahami was wanted for questioning after an explosion in the Chelsea neighborhood of Manhattan left 29 people injured on Saturday. Authorities later said the Chelsea blast and one earlier in the day were related and they were seeking Rahami in connection with both incidents.

Here’s everything we know about him so far:

There is “nothing to indicate” that Rahami was on the FBI’s radar, according to William Sweeney Jr., the assistant director in charge of the FBI’s New York office. Rahami’s motive is unclear and possible federal charges are pending. Sweeney said authorities do not have information yet to show his path of radicalization.

Rahami’s father, Muhammad Rahami, runs a fast-food restaurant called First American Fried Chicken, which is directly below their home in Elizabeth, N.J., the New York Times reports. A customer of the fried chicken restaurant described the younger Rahami as a friendly man who loved fast cars and appeared to be on his way to taking over the family business.

“He’s a very friendly guy, he gave me free chicken,” the 33-year-old patron, Ryan McCann, told the Times. “He was always the most friendly man you ever met.”

“He’s a guy you would never expect,” McCann added. “This is sad, terrifying, scary.”

Javid Barakzai, a family friend who grew up with Rahami and his younger brothers, told TIME on Monday that he was shocked to see Rahami named as a suspect in the bombing. “I’m really surprised. I didn’t expect him to do something like that. He was always the quiet one, the shy one,” he said. “It’s really crazy.”

Barakzai, 20, said his family had lost touch with the Rahamis since they were neighbors about eight years ago. Barakzai last saw Rahami at their mosque about two weeks ago. “I haven’t talked to him in a while. I’ve seen him a couple of times at mosque. We pray every Friday,” he said.

Both attend the Muslim Community of New Jersey (MCNJ) mosque in Fords, N.J., although Rahami attended prayers inconsistently, Barakzai said. MCNJ did not immediately return a request for comment.

Rahami’s relatives had filed a federal lawsuit in 2011, claiming that city officials tried to restrict their restaurant’s hours of operation and that they were targeted because they are Muslims, according to the Associated Press. The lawsuit was terminated in 2012.

Bollwage told reporters that First American Fried Chicken had run into problems with the city beginning in 2002 when residents complained that the 24-hour business was noisy. The City Council passed an ordinance that would force the restaurant to close at 10 p.m.

Rahami’s father told MSNBC that he had “no idea” his son had allegedly been plotting the explosions. “I’m not sure what’s going on,” the elder Rahami said. “It’s very hard right now to talk.”

Authorities had said Rahami should be considered dangerous. “I want to be very clear that this individual could be armed and dangerous,” New York City Mayor Bill de Blasio said.

The announcement that police were seeking Rahami came as authorities continued to investigate other explosive devices found in New Jersey. Early Monday, a suspicious device found near a train station in Elizabeth, N.J. exploded while a bomb squad was trying to disarm it with a robot. 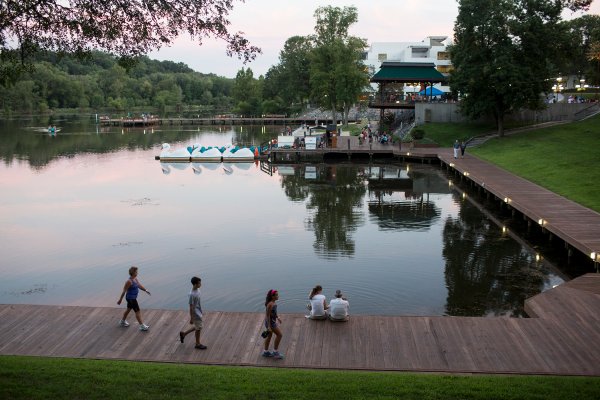 These Are the Best Places to Live in the United States
Next Up: Editor's Pick