At the Emmys, Great Winners Overshadowed a Negative Host

In many crucial respects, the Emmys were beautifully produced. Shame about that host.

ABC used TV’s marquee night — what had in the era of broadcast dominance been the night kicking off the TV season, and what is even still a meaningful showcase for TV’s top talent — to showcase a remarkably inclusive set of winners. The acting winners in the limited-series field alone included three black performers (The People v. O.J. Simpson’s Courtney B. Vance and Sterling K. Brown and American Crime’s Regina King) and a queer woman (Simpson’s Sarah Paulson). Elsewhere, Transparent winners in the acting and directing fields spoke forcefully in favor of inclusion, with actor Jeffrey Tambor saying he hoped to be the last non-trans person to play a trans role and director Jill Soloway urging viewers to “topple the patriarchy.”

But what ABC chose to do with the portion of the evening within its control was sour and strange. It wasn’t anything quite so reductive as that Jimmy Kimmel is another straight white man — last year’s host, Andy Samberg, shares all those demographic markers and yet showed up for a delightfully nonsensical bit with Game of Thrones actor Kit Harington and killed. It’s that Kimmel’s attitude, one of derision and disdain, wore poorly over the course of the broadcast. After Aziz Ansari and Alan Yang won a writing award for Master of None (during which Ansari was among only a very few of the evening’s winners to be cut off early) early in the show, Kimmel re-emerged to announce there was “almost too much diversity” in the show. It was a joke, sure, but an odd and nasty one that seemed to minimize winners as mere tokens used to check off a box.

Kimmel also, bizarrely, went after producer Mark Burnett at quite some length in his monologue for having “created” Republican presidential nominee Donald Trump — as though the Apprentice host had not, in the time since his Burnett-produced reality show went off-air, been soft-pedaled and brought into the realm of normalcy by various component parts of the entertainment media, including Kimmel’s own talk show. And after Vance claimed the best actor in a miniseries prize for showing audiences the struggle and humanity behind the image of the late O.J. Simpson defense attorney Johnnie Cochran, Kimmel walked onstage and cracked that Cochran was surely watching “smiling up at us.” It was a joke both entirely unoriginal in its construction and deeply revealing of precisely why broadcast TV tends so frequently to lose to cable at this telecast. The sensibility viewers saw in The People v. O.J. Simpson is one with room for lacerating humor, along with rage and, most of all, empathy. Kimmel didn’t want to understand; he simply wanted to be heard. Simply being annoyed was argument enough.

It’s not clear why he was quite so out-of-sorts, beyond the fact that it’s his brand. The comedy and drama categories, won at the highest levels for a second year in a row by Veep and Game of Thrones, don’t quite tell the whole story. (Veep is, it’s worth noting, wildly deserving and perhaps should have won more awards, though, as is always the case after a great speech, I would hate to now take away Ansari’s writing or Soloway’s directing trophy; Game of Thrones, with a meaningful creative comeback in its sixth season, is TV’s signature hit and will likely win until it wraps.) The broadcast had something for just about any TV fan, including unexpected wins for cable drama actors Rami Malek (Mr. Robot) and Tatiana Maslany (Orphan Black) to the seeming coronation of a crowd-pleasing network comedian (Kate McKinnon) as the rare Saturday Night Live cast member with a statuette. Malek is a genuinely exciting new star who beat several far more established talents, in what felt like a bellwether for the ceremony’s future, guaranteeing its relevance by fulfilling its historical function of waking people up to shows they might not otherwise be watching. Neither the wending-to-a-fault Orphan Black nor McKinnon’s much-lauded Hillary Clinton impersonation would win my own personal TV awards. But the mere fact that these wins, unorthodox as honors for a sketch comic and an actress playing several clones were, seemed to reflect someone’s point of view (rather than the dull sort of consensus that the show has fallen victim to in the past) was worth celebrating.

Perhaps the evening’s best aspect was the generous hand with which time was given to many winners. The show ended right on time due to an unfortunately merciless hand with cutting off winners in behind-the-scenes categories and a couple of no-shows (Downton Abbey’s Maggie Smith and Bloodline’s Ben Mendelsohn, who were, not coincidentally, two of the more conventional winners). Oddly, Kimmel complained to the show’s last moment about how long and dull it was, though it’d have been three minutes shorter if he’d refrained from bringing movie actor Matt Damon onstage for a bit that I guess Kimmel fans must have understood. But through sheer volume, genuinely grateful winners who were allowed to get real ended up drowning out the host’s boredom with the enterprise. Baskets’ Louie Anderson, who plays a woman on the show, grew weepy while listing his many siblings and declaring he made a better woman than man; Veep’s Julia Louis-Dreyfus shook through a speech at whose conclusion she admitted she was mourning her recently deceased father; O.J.’s Brown and Vance were seemingly in competition as to who could more effusively praise his wife; and O.J.’s Paulson apologized to her character Marcia Clark on behalf of an America that had scorned her.

That much seemed like a rebuke to Kimmel, who’d made jokes at the expense of prosecutor Clark, in attendance as Paulson’s date. But at that point, no one but those keeping score remembered. It was a well-chosen enough winner, and one so eloquent and given so much time to express herself, that she erased the impact of a host who didn’t have much to say in the first place. 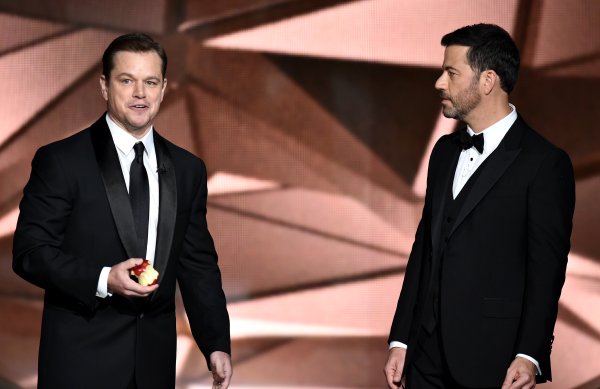 Watch Matt Damon Taunt Jimmy Kimmel for Not Winning an Emmy
Next Up: Editor's Pick