What to Know About the Chelsea Explosion

An explosion in the Chelsea neighborhood of New York City injured 29 people Saturday evening in what Mayor Bill de Blasio called an “intentional act.” Authorities found “components indicative of an IED” at the bombing site, NYPD Commissioner James O’Neill said. Investigators found a suspicious second device a few hours later, officials said. Here is what we know about the explosion so far:

Where was the explosion?

The blast happened on West 23rd Street around 8:30 p.m. in front of a residence for the blind, amid a bustling area filled with restaurants and a Trader Joe’s supermarket. The explosion appeared to have come from a construction toolbox in front of a building.

What is the injury count?

Police said 29 people were injured in the explosion, with one puncture wound considered serious. Other injuries were described as scrapes and bruises. All 29 victims were released from the hospital Sunday morning, New York Gov. Andrew Cuomo said at a news conference.

What happened to the second device?

A second device that was discovered about four blocks from the scene appeared to be a pressure cooker attached to wiring and a cellphone, police said. The device, found on West 27th Street, was removed with a robot and taken to an NYPD firing range in the Bronx.

A bomb squad is investigating the second device, O’Neill told reporters on Sunday.

Is there a connection to an explosion in New Jersey?

The Chelsea explosion came hours after a pipe bomb that exploded in Seaside Park, N.J., ahead of a 5K charity run to support the Marines and sailors. The race was canceled and no injuries were reported. Officials said the New Jersey incident had no connection to the New York City explosion.

Speaking to reporters Sunday morning, Cuomo said the bomb used in New Jersey appeared to be different than the one used in Manhattan.

During a news conference Sunday afternoon, de Blasio said there was no “specific evidence at this point in time” connecting the bombings, but that authorities are still investigating the possibility.

Was this an act of terrorism?

De Blasio called the blast “an intentional act” but said at a news conference that there was no connection to terrorism. “We have no credible and specific threat at this moment,” he said.

Cuomo said there was “no evidence of international terrorism” as terrorist groups like ISIS have not claimed credit for the bomb.

“A bomb exploding in New York is obviously an act of terrorism but it is not linked to international terrorism,” he said.

He continued, “We have no reason to believe at this time there is any further immediate threat.”

Cuomo warned New Yorkers to “err on the side of caution.”

“Whoever placed these bombs, we will find who planted these explosions and they will be punished,” he said.

Authorities found “components indicative of an IED,” at the West 23rd site, O’Neill said during a news conference Sunday afternoon.

“No individual or group has claimed responsibility,” O’Neill said.

De Blasio reiterated the bombing was “intentional” during the news conference, but noted that authorities have not found a motive.

“From everything we’ve seen so far, this was an intentional act,” he said. “But we do not know the motivation or the nature of it.”

Police presence will increase throughout the city this week, officials said.

How did the presidential candidates respond?

Both Donald Trump and Hillary Clinton addressed the explosion on the campaign trail. Trump, speaking in Colorado Springs, said a “bomb went off” before officials released details of the incident.

“I must tell you that just before I got off the plane, a bomb went off in New York and nobody knows what’s going on,” Trump said. He continued, “But boy we are living in a time—we better get very tough, folks. We better get very, very tough. It’s a terrible thing that’s going on in our world, in our country and we are going to get tough and smart and vigilant.”

He later tweeted, “I would like to express my warmest regards, best wishes and condolences to all of the families and victims of the horrible bombing in NYC.”

Clinton said it was important for the nation to support the first responders and the investigators trying to determine what happened, and appeared to call Trump out for speaking without official confirmation.

“I think it’s always wiser to wait until you have information before making conclusions, because we are just in the beginning stages of trying to determine what happened,” she said.

Clinton released a statement on Sunday going over her plans to defeat terrorism in the wake of the explosions in Chelsea and New Jersey, as well as a stabbing spree in Minnesota in which 9 people were injured. The FBI is investigating the stabbing attack as a “potential act of terrorism” after an ISIS-run news agency claimed responsibility, the New York Times reported.

“ISIS has claimed responsibility for the attack in Minnesota, and this should steel our resolve to protect our country and defeat ISIS and other terrorist groups,” Clinton said in a statement. “I have laid out a comprehensive plan to do that. This includes launching an intelligence surge to help identify and thwart attacks before they can be carried out and to spot lone wolf attackers.” Another component of the plan includes working with Silicon Valley to “counter propaganda and recruitment efforts online.” 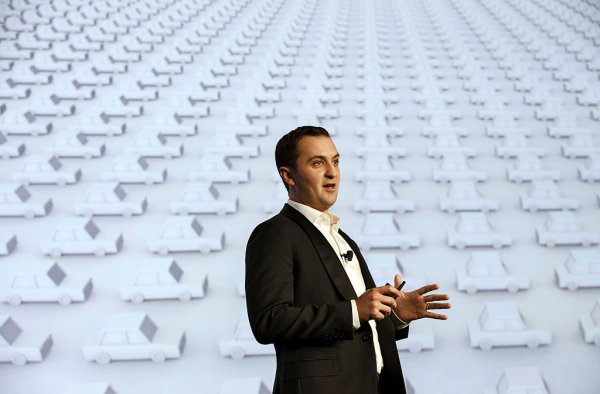 Exclusive: Lyft Cofounder Lays Out His Vision of the Driverless Future
Next Up: Editor's Pick