What Judaism Says About Bullying

Professor Eisen is the chancellor of the Jewish Theological Seminary.

Side-by-side headlines in the morning papers on Sept. 9 called to my mind one of the most important teachings in Judaism, which happened to loom large in the portion of the Torah read at synagogue the next day.

The lead story concerned Donald Trump’s continuing praise of Vladimir Putin as a great leader worthy of admiration by Americans. The second reported Trump’s suggestion that integrating women into the armed forces had been a major cause of sexual assault. These statements follow earlier pronouncements attacking Mexican immigrants and belittling women, people with disabilities and soldiers captured in combat.

I am not a political analyst, or a psychoanalyst, but it does not take either expertise to notice that in every one of the cases just mentioned, Donald Trump has aggressively taken the side of the strong against the weak. He has not only identified himself with the former but shown contempt for the latter. In his moral universe, power is celebrated, even glorified. Those lacking power are seen as inferior, regardless of the justice of their cause.

This stance goes directly against Jewish tradition, which commands its adherents to protect the widow and the orphan, to take care of the stranger and to never allow justice to be perverted by power or wealth. If the Torah had known the word “bully,” I have no doubt it would have ordered Jews, in the clearest possible terms, “Thou shalt not bully.”

My parents taught me two things about bullying when I was growing up, and I knew that both derived from personal experience on their parts, as well as the experience of the Jewish people in the 20th century. First: Never be a bully. If you see someone being bullied, whether by an individual or a group, go to his or her defense. Second: Never allow yourself to be bullied. Stand up in your own defense. Don’t pick fights but don’t run away from them. Because you can be sure if the bully succeeds that day, against you, he will bully you again and will go after others, as well.

Some might see a contradiction between these two teachings, as they might between the Jewish imperatives to show kindness and seek peace, on the one hand, and the willingness of Jews to use arms to defend themselves if necessary. I do not see a contradiction here—and, indeed, both teachings can be found in the Bible, as well as in voluminous rabbinic stories and legal codes. Our tradition inculcates care for the powerless but also insists upon the right to self-defense. One finds both teachings in the works of modern Zionism, including the Code of Ethics of the Israel Defense Forces, which specifies when the use of force is permissible or required—and when it is forbidden.

Jewish tradition has never encouraged pacifism and does not promote self-denial—even as it does not favor indulgence in base desires, including the desire to lord it over others. If your neighbor attempts to rob you or injure you, says the Torah, stop him, lest he do the same to others. But if your neighbor needs your help, bend over backwards to assist. It is the right thing to do—and someday you too may need assistance and will want your neighbor to provide it. The same holds true for the Jewish community as a whole. Jews had been “strangers in the Land of Egypt,” and remained a powerless minority group in many countries over the centuries. Tyrants who attacked other minorities often attacked the Jews in turn, and vice versa. The rabbis urged Jews to stand up for one another—and to help other communities, too. From this flows the ethic of contemporary Israel: Defend the state against enemies, but pursue peace.

If individuals are secure in the gifts God has given us, we can share these gifts with others without worrying that someone else might be making more, or show themselves to be stronger than we are, or take advantage of us and our generosity. The opposite path is to make sure you alone get the very best deal, always are the boss and show you are the boss, maximize every advantage, eliminate or hide every vulnerability, talk tough and be tough.

“Who is the gibbor, the strong and heroic individual?” ask the rabbis in Ethics of the Fathers. “The person who conquers his own evil drives.” Not the one who subdues others—but the one who does not need to subdue anyone, except in self-defense, and who is completely secure in his or her place in the world. (“Who is rich?” ask the rabbis in a related teaching. “The one content with his portion.”) If you are really strong, you need not flaunt your strength, and need not prove it by beating up on those who are weaker. 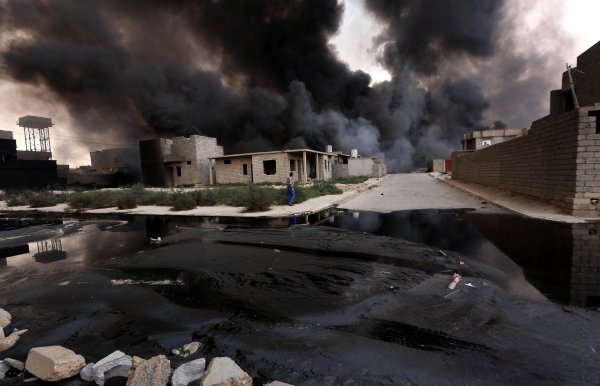 How to Fight Extremism with Atheism
Next Up: Editor's Pick