In September of 1787, the Founding Fathers signed the United States Constitution. As America celebrates this occasion on Constitution Day this Friday, 229 years later, TIME spoke with one of them, the man known as the “Father of the Constitution”: James Madison.

(Well, by James Madison we mean Bryan Austin, a Madison “historical interpreter” who works with the Colonial Williamsburg Foundation.)

Here’s what “James Madison” wishes he could have added to the Constitution, what he thinks of Alexander Hamilton and whether he would support a woman for president.

TIME: What year is it?

James Madison: The year at present is 1791. We have seen just within this year the ratification of the first ten amendments of our Constitution, the Bill of Rights, which I have had the distinct and unmerited honor of serving as architect of. It is equally at present a great dilemma of our politics that we have descended into artificial factions, that of party.

What is your favorite part of the Constitution?

There are those at present who would dub me with that honorary “Father of the Constitution.” I should proffer that government is not like that fabled Goddess of Wisdom, the work of one mind. No, instead it takes the work of many heads and many hands. So I suspect in that degree the greatest virtue of our federal Constitution is that it is indeed the work of compromise. But I should say equally, it is to my mind a document that fixes perfectly the balance necessary to government to ensure that power does not corrupt, but ensures equally the energy necessary in government to ensure this Republican democratic experiment need not denigrate into anarchy.

What do you think the biggest flaw is in the Constitution?

One of the greatest defects I have found in that federal Constitution is initially the lack of establishing a federal university. This was something both unique to my mind as well as the mind of General Washington, by which we can establish one singular university to ensure that gentlemen, and perhaps one day ladies, from the thirteen of these United States as we grow could come together, consolidate the systems and virtues of our government and from there learn the virtue of unity outside the local peculiarities of their state.

I am somewhat abashed to say I was also not in favor of a federal Bill of Rights. To my mind, it was my opinion that an enumeration that was not complete was not safe. If we are to be a society of rights, we cannot enumerate what rights above others we should uphold.

What do you think of Alexander Hamilton?

(Laughs) Mr. Hamilton has been a creature of great controversy and I think great relevance as well. Mr. Hamilton is of the opinion, and it is not invalid, that wealth is necessary to ensure liberty, happiness, and above all virtue in a society. [But] if we are to prove a more enlightened society, if we are to prove to the whole of the rest of the world that this experiment that we began in 1776 can succeed, that men are capable of governing themselves not out of fear, not out of passion, but instead out of reason, logic and compromise, we must in every instance mirror it in our systems of government. To my mind, the former Secretary of the Treasury endeavors to upset that balance [in the government] for the hope of glory. I will confess he was a great ally and friend through the course of this last decade.

What do you think the most important qualities in a President?

He must in every regard be able to act with that expedience and sometimes secrecy that the office often warrants. A man who in every regard can cherish friendly intercourse with all nations of a correspondent disposition. A man who is capable of maintaining sincere neutrality towards belligerent nations. A person who in all cases would prefer amicable discussion, reasonable accommodation of differences, than a decision made out of any sort of impulse for an appeal to arms. He must be a man of conviction.

We have seen over the the course of time varying degrees of demagogues who issue promises and luxury, will grant the people their utmost desire. Happily for America, we rely on lessons of experience where we hallow and raise not men but ideas and virtues. I should add when writing the Constitution we had our shining example of who the chief magistrate should be, President Washington.

Do you think it’s better for the president to be an accomplished politician, or a citizen new to government?

I confess, Madam, I am somewhat abashed at the question. Having entered politics at 25 years of age in the old colonial council of Williamsburg, Virginia, I have, outside of my income as a planter and a planter’s son, served as a career politician.

We’re a country of hyphenates, wherein man need not be defined only by statesman or politician, but equally by the various other degrees. Any person seeking the office of the president should hold in some regard, even if it is not necessarily by experience, knowledge regarding the various tenets, virtues, and indeed history of [government] as well as an avowed love not only for America but for the Constitution.

Could you see ever supporting a woman for president?

Oof, that’s a novelty. Speaking of their aptitude, the evidence of the female for studies of the highest order cannot be questioned, so I suspect wheresoever posterity should travel over the course of government, it should fall to them and they should judge equitably. Radical, indeed, but curious.

How did you celebrate signing the Constitution?

[The members of the Constitutional convention] retired to the City Tavern several blocks from Independence Hall wherein President Washington funded a dinner for the gentlemen who attended, constituting three bottles of Madeira at least to a man, nine bottles of beer, eight punch bowls— you forgive me for not remembering a figure. But as we toasted to the success of the Constitution, needless to say we were very lubricated. 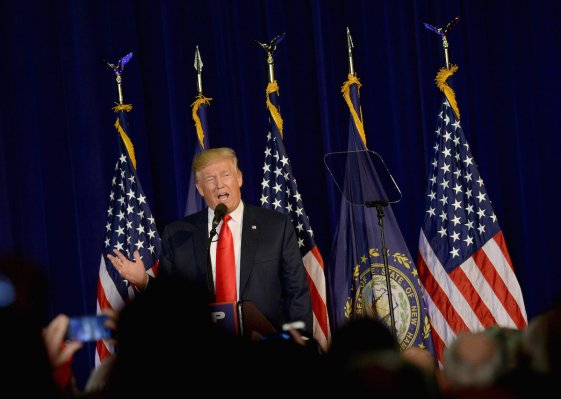 How the Birther Thing Actually Started
Next Up: Editor's Pick