(WASHINGTON) – Burma’s leader Aung San Suu Kyi urged businesses to invest in the Southeast Asian country on Thursday as a way to advance its democratic transition, a day after U.S. President Barack Obama pledged to lift long-standing sanctions on the country.

Suu Kyi, speaking in Washington, said that economic development spurred by foreign investment was needed to show the impoverished nation of more than 50 million people that democracy could improve their livelihoods and promote further change.

“Economic success is one of the ways that we can persuade everyone in our country, including the military, that democracy is the best way forward for our union,” Suu Kyi told a dinner of business officials, diplomats and government officials hosted by the U.S. ASEAN Business Council.

“In order to make the political transition work, we have to have the economic expectations of our people fulfilled as well,” she added.

Sanctions were imposed on the country, formerly known as Burma, in 1997 after decades under a military dictatorship that stifled dissent and showed little regard for human rights.

But the Nobel Peace laureate has been criticized by the private sector for not focusing on business reforms and failing to put forth comprehensive economic policies.

Obama said on Wednesday that he would lift remaining sanctions on Burma, a move supported by Suu Kyi, who said she recognized that some believed the move came too soon.

“In some ways it is a risk, it as much a political risk as an economic risk, because there are those who believe it is not yet time for us to remove the sanctions, but we think that it is time now for our people to depend on themselves, to go forward with the help of our friends,” Suu Kyi said of the decision.

When sanctions are lifted, it will clear U.S. businesses to work with companies and individuals that were previous off limits, including some of Burma’s most prominent businessmen.

“AWC (Asia World Company) expects to see a stronger economic growth and foreign investments in Burma with the removal of the sanctions,” the company said by email. 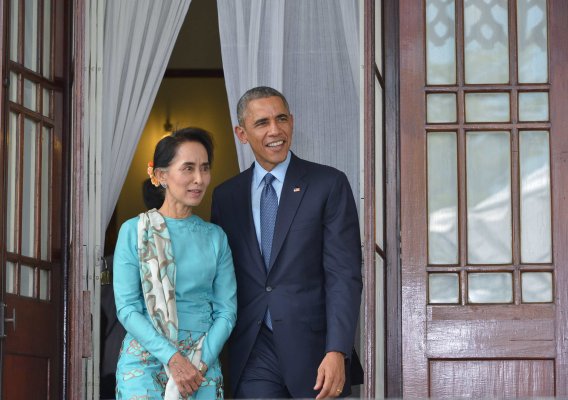 5 Things To Know About Aung San Suu Kyi’s Trip to Washington
Next Up: Editor's Pick