Renho Murata was selected this week to head the Democratic Party, Japan’s main opposition, paving the way for her to potentially become the country’s first female prime minister. Here are four things to know about her.

She became a Japanese citizen at age 17.
Murata was born in Japan in 1967 to a Japanese mother and Taiwanese father, but Japanese law at the time only passed citizenship through a child’s father. She chose to become Japanese in 1985 when the law changed. Supporters have said that her experience will allow her to foster a discussion about diversity in an island that has experienced cultural change in recent years. “I will have more discussion within the party about how Japan can promote such values as diversity and coexistence,” she said after being elected to her new position on Thursday.

The issue has also caused complications. Japan bars citizens from holding dual citizenship, but Murata has continued to hold Taiwanese citizenship despite criticism. She said recently that she has filed paperwork to give it up.

Her chances at becoming PM are slim — at least for now.
Murata would be first in line to become Prime Minister if her party takes the reigns in Tokyo. But the chances of a Democratic Party takeover remain slim as current Prime Minister Shinzo Abe remains solidly popular. A recent poll showed Abe’s Liberal Democratic Party — which has dominated postwar Japanese politics — with 40% support compared to just 8% for the Democrats, whose last premiership, by Naoto Kan, was marred by the Fukushima disaster and economic decline.

She’s one of three female politicians to take prominent positions in Japan this year.
Women are significantly underrepresented in Japanese government holding only 15% of seats in parliament and Abe recently acknowledging that he would not be able to fill 30% of management roles by 2020 as he had previously aimed to accomplish, according to a New York Times report.

But supporters hailed Murata’s rise as a sign of potentially changing times. Yuriko Koike became the first female governor of Tokyo in July, and Tomomi Inada was appointed the country’s Defense Minister in August.

She has personality.
Japanese politicians tend to be stolid and dull, but Murata is different. Political observers say she was helped by charisma that party leaders hope will liven up the party. She was a model and television host before being elected to parliament in 2004. And, now, she has 400,000 followers on Twitter.

Correction: The original headline of this story misstated that Murata was Japan’s first female opposition leader. She is the first female leader of the Democratic Party. 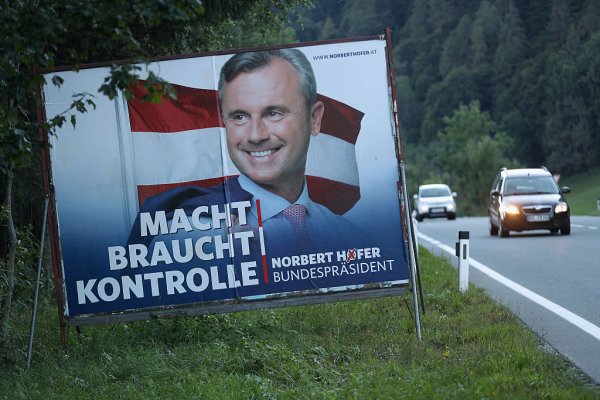 These 5 Facts Explain the Biggest Political Risks Facing Europe
Next Up: Editor's Pick