“If we’re successful, we show our community and younger girls, not just Latinas but from other ethnic groups, they can do it as well.” Victoria Flores, co-owner of Lux Beauty Club
Photography by An Rong Xu for TIME
By Tessa Berenson

Victoria Flores knows her market. “Every girl wears hair,” she says as she brushes the synthetic extensions that were just clipped into a beauty blogger’s long bleached locks. “I don’t care if she’s white, black or Latina.”

Flores, 42, is working in an airy space in midtown Manhattan, three floors above a perfume outlet and a row of cluttered costume-jewelry stores. As a late summer sun beats down on the vendors below, Flores hustles back and forth across the office in white skinny jeans and wedge heels, trying to keep her own business afloat. Flores is the founding co-owner of Lux Beauty Club, an online hair-extension retailer, and since she launched her company in March 2016, life has run at warp speed. Flores, who is of Mexican descent and was born in El Paso, Texas, used to work on Wall Street as an associate at Morgan Stanley Prime Brokerage. Now her days revolve around hair: buying it, selling it and constantly trying to raise more capital so she can keep sending it out to women who think that getting new extensions is, as she puts it, “better than any paycheck.”

All this makes Flores something of an unsung symbol of the times: she belongs to the fastest-growing group of small-business owners in the U.S. From 2007 to 2012, Latinos launched small businesses at a pace more than 60 times that of their non-Latino counterparts, according to the Stanford Latino Entrepreneurship Initiative. Latinas like Flores are making their own contributions to that boom: according to the 2016 State of Women-Owned Businesses Report, the number of Latina-owned businesses in the U.S. has grown by 137% over the past nine years–outpacing all other categories of minority women.

One might get a very different impression, however, by listening to the political debate in the U.S. To hear Donald Trump explain it, Latino immigrants are a drag on the economy. “They’re taking our manufacturing jobs. They’re taking our money. They’re killing us,” he said at a rally in 2015. According to a 2016 Pew Research poll, 59% of Americans say immigrants strengthen the country, while 33% say they are a burden. But this diverges along partisan lines, with 78% of Democrats saying they strengthen the nation and just 35% of Republicans agreeing. After the founder of Latinos for Trump warned that too many Mexican immigrants would result in “taco trucks on every corner,” the U.S. Hispanic Chamber of Commerce–which endorsed Hillary Clinton in July, the first time the group has ever come out for a presidential candidate–vowed to park one at every polling place instead.

The reality is Latinos make up about 17% of the U.S. population and pump an estimated $1.3 trillion into the economy each year. They also represent about 15% of the country’s workforce. (Undocumented immigrants, encompassing all countries of origin, total about 5%.) Far from being a distraction or a drag, Latinos are providing crucial growth in the U.S. economy. This fall, in a $75.8 billion back-to-school market, Latinos planned to spend 16% more per household than the rest of the nation, according to the National Retail Federation. And the numbers are growing: they will likely become 30% of the nation’s population by 2060. Warns Henry Cisneros, former Secretary of Housing and Urban Development: “Failure to mainstream this population, failure to give vent to their entrepreneurial instincts and let them run businesses, failure to finance them so they can borrow and invest and consume and build, is a huge missed opportunity for the United States.”

One reason latinos may be more willing than others to gamble on a new business is that so many have already taken considerable risks–whether to get to the U.S. in the first place or just to get ahead. Compared with the risks of crossing a border or merely enduring the hardships that can still result from belonging to a minority group in the country, the uncertainty of starting a business seems almost negligible. “You generally come [to the country] with fewer resources,” says Sol Trujillo, former CEO of Telstra, Orange and US West. “Therefore you have to be more risk-taking, more entrepreneurial, and you generally have to work harder.”

Despite their booming growth, Latino-owned businesses are typically smaller than others. A new Census survey of entrepreneurs found that in 2014, the average Hispanic-owned company had sales of about $1.1 million; white-owned firms averaged about $2.4 million. It’s a gap that Trujillo and other business leaders attribute to a dearth of mentoring available to new Latino business owners. “If you were going to look and say what’s the biggest thing, it’s access to networks,” says Remy Arteaga, executive director of the Latino Business Action Network, of the challenges facing Latino entrepreneurs. “That also means access to resources, access to talent for employees and access to mentors.”

Still, in 2012, Latino-owned businesses employed 2.5 million workers, according to the Stanford study, a number that has likely grown since. Flores employs four people at Lux Beauty Club. She doesn’t have the old-boy network with ties to deep pockets that other startup owners might enjoy. But she hopes to expand through partnerships with other companies and by wooing beauty bloggers like Hadley Darag, who was in the office to film a promotional video on the day that TIME paid a visit. “It’s about being scrappy,” Flores explains, “but it’s about the community really helping each other, and that’s important because I want another woman like me to also start her own business.”

The pattern is repeated in real estate. From 2000 to 2014, Hispanics accounted for about half of the growth in homeownership in the U.S., according to the National Association of Hispanic Real Estate Professionals (NAHREP). In 2014 alone, Hispanics were responsible for 40% of homeownership growth, the largest share among any racial or ethnic group.

Banks have taken note. “We could see the growth happening around us,” says John Stumpf, CEO of Wells Fargo. “It was one of those just obvious things.” To that end, Wells Fargo announced a goal of lending $125 billion to Hispanic home buyers over the next 10 years. As part of its outreach, the bank is working on ways to make loans more accessible to immigrant families. Brad Blackwell, head of portfolio lending for Wells Fargo Home Mortgage, says the bank has encountered many Hispanic families that have multiple generations living together and contributing to household wealth, but traditional loan programs typically count only the incomes of the two people applying for the mortgage. A new Wells Fargo program would factor in that extended-household income to increase the chance of loan approval.

“Hispanic families very much want to be homeowners in this country and are going to do the things that they need to do,” Blackwell says. For Wells Fargo, the shift in strategy was both a virtue and a necessity. In 2012, it agreed to pay $175 million to settle a lawsuit alleging that it discriminated against African-American and Hispanic borrowers. Stumpf said those loans originated with outside lenders and had “nothing to do with the loans that we were originating through our team.” (In an unrelated case, Wells Fargo was slammed on Sept. 8 with $185 million in fines in a settlement over creating accounts that consumers didn’t authorize.)

Overall, homeownership rates for Latinos are still lower than those for non-Hispanic whites. There are reasons for that. Latino households have lower median incomes in the U.S. relative to others, and they’re denied home loans at a rate that is 5 percentage points higher than the average, according to Harvard’s Joint Center for Housing Studies. But trends point to improvement: the Urban Institute predicts that Hispanics will account for 52% of new homeowners between 2010 and 2030. While states like California, Texas and Florida still account for the largest numbers of Hispanic homeowners, Gary Acosta, CEO of NAHREP, says markets in Iowa and Wisconsin are experiencing the greatest growth. “The home is the center of the Latino family and the Latino culture,” he says. “So the desire for homeownership among the Latino population is really more powerful than most people recognize.”

In the standard portrait of the American Dream, there’s at least one car parked in the driveway. A study by Viant, an advertising-technology company owned by TIME’s parent company, found that in 2015, Hispanic consumers accounted for $27.9 billion in registered new-vehicle transactions in the U.S., about 11% of the total market. Hispanic purchases of luxury cars rose 16% from 2013 to 2015, compared with 5% growth among non-Hispanics in the same period.

Car companies have retooled their marketing to reflect where the growth is. Some 73% of Toyota’s U.S. sales growth in 2015 came from Hispanics, who buy 1 of every 4 Corollas in the country. Toyota created a Hispanic Business Strategy Group in 2013 dedicated to cultivating and retaining the growing pool of buyers. “Every 30 seconds, two non-Hispanics reach retirement age, while a Hispanic potential Toyota customer turns 18,” says Patricia Pineda, vice president of the group. To recruit these potential young buyers, Pineda makes sure that Toyota attends major Latino conferences each year, including one held by the U.S. Hispanic Chamber of Commerce and another that promotes Hispanic social-media stars.

Toyota isn’t alone. More than 60% of Honda’s growth in 2015 came from Hispanic buyers. Gina Jorge, head of multicultural marketing at Honda, has been wooing those customers by emphasizing what she calls an “aspirational spirit” in advertising. A 2015 Spanish-language ad for the Honda CR-V featured a young girl dreaming of being an astronaut, a story that wasn’t told in the car’s English-language ads. At the same time, Advertising Age found that spending in the Hispanic media market grew by 12% in 2014, far more than the estimated 4.9% growth for major-media ad spending overall. The 50 biggest advertisers to Hispanics increased their spending that year by 17.6%, to $3.8 billion.

The retailer Target, says senior vice president of marketing Rick Gomez, is “keenly focused on leaning into Hispanic insights” around style, beauty and baby products, areas he identified as having the greatest potential for further growth with those consumers. Target released its first style commercial created specifically for Latinas in 2016 and boosted its marketing to the community by 20%. Data backs up Gomez’s claim: a 2015 Nielsen report found that sales in several beauty categories–including cosmetics, hair care, personal-care appliances and shaving needs–declined overall in the U.S. the previous year even as sales increased in Hispanic households.

Which explains in part why Flores at Lux Beauty Club is so busy. “There are so many different types of Latinas. They don’t all look like me,” she says. “There’s Dominican Latinas, there’s Puerto Rican Latinas, there’s dark, light. We’re all different colors and have different hair textures. So we want to be able to buy products that speak to us.”

After Flores’ guest, beauty guru Darag, finishes applying her extensions and teaching her nearly 40,000 Instagram followers how to style them, Flores briefly joins her on camera. The two women blow a kiss and sign off with Darag’s signature catchphrase, “Stay beautiful.” When the camera cuts, Flores pecks Darag on the cheek and gives her encouragement: “That was awesome!” Then she whirls down the hallway to her next meeting. 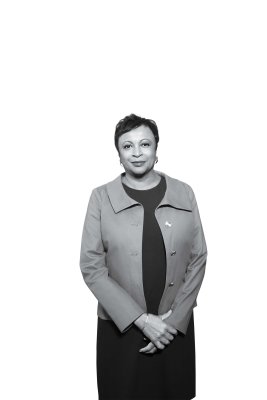 10 Questions With Librarian of Congress Carla Hayden
Next Up: Editor's Pick