Children Must Be at the Top of the U.N. Refugee Agenda

5-year-old wounded Syrian kid Omran Daqneesh sits alone in the back of the ambulance after he got injured during Russian or Assad regime forces air strike targeting the Qaterji neighbourhood of Aleppo on August 17, 2016.
Anadolu Agency—Getty Images
Ideas
By Caryl M. Stern and Naomi Post
Caryl M. Stern is the President and CEO of the U.S. Fund for UNICEF.
Naomi Post is Executive Director of Children’s Defense Fund–New York

Over the last year, searing images of refugee children—including toddler Alan Kurdi’s drowned body on a Turkish beach and five-year-old Omran Daqneesh’s stunned and bloodied face after a brutal bombing in Syria—have shocked the world. But these two boys represent just the tip of the iceberg. In fact, UNICEF estimates that, across the globe, nearly 50 million children—a staggering number—have left or fled their homes. More than half these children are escaping violence and war. Today, one out of every 200 children worldwide is a refugee. And the problem is growing fast. There were twice as many child refugees in 2015 as there were in 2005. We are witnessing the worst crisis of child refugees and migrants since World War II.

We must do more to save millions on the run just like Alan and Omran. Fortunately, there are two crucial opportunities for action this week. On Sept. 19, the U.N. is convening its first-ever summit to address the refugee and migrant crisis. On Sept. 20, President Obama has invited world leaders to a summit on refugees to galvanize additional funding commitments and craft new policies to address the crisis. As world leaders meet, Alan’s and Omran’s families are watching. We are all watching. Governments and policymakers must put children at the top of the agenda.

Ensuring the safety and wellbeing of the world’s child refugees and migrants is imperative for many reasons. First and foremost, it’s the moral thing to do. No child should be deprived of her future because she was born in a country afflicted with gang violence, war or poverty. Second, it’s the law. By international convention, children have a full array of rights to survive and thrive, and governments are obligated to prioritize children’s needs and act in their best interests. Most important, helping children should never be politicized. Whether you call them migrants or refugees, they are children first, and they deserve the same care and support we would give to any child in need, no matter where she lives or why she was forced to leave home.

But protecting migrant and refugee children is much more complex than offering them safety, food and shelter. Often traumatized by the violence they’re fleeing, refugee and migrant children face new dangers during what should be journies to safety and hope. These risks include drowning, malnutrition, trafficking, kidnapping, rape and even murder. In the countries that they travel through, and at their destinations, they often suffer from discrimination despite the many extraordinary people and organizations that offer generous help along the way.

Unaccompanied child refugees are particularly vulnerable to these risks, and there are more than 100,000 of them worldwide, a very conservative estimate. In New York, for example, we’ve seen a surge in unaccompanied minors, with nearly 4,000 children—most from Guatemala, Honduras and El Salvador—placed in communities across the metropolitan area since October 2015. Children’s Defense Fund-NY has found that these children are in desperate need of behavioral health interventions and counseling alongside basic health, education and child protection services. Yet despite the hurdles they face, many have big dreams and hope someday to become doctors or teachers in their new home country.

When it comes to helping child migrants and refugees, we recognize the enormous challenges here and abroad. These include intractable conflict and the dire effects of poverty and climate change in the countries children are fleeing, an ungrounded fear of immigrants and sometimes unfavorable political climates in the West, and a huge gap between children’s growing needs and currently available funding. But policymakers can and must address them.

Sunday evening, on the Dag Hammerskjold Plaza near the U.N., we held a candlelit Children First Vigil to urge world leaders to put children first. As they meet today and tomorrow, they must do more to meet the emotional, social and educational needs of the world’s migrant and refugee children. Indeed, the U.N. Refugee Agency reported last week that 3.7 million school-age children under its worldwide mandate have no school to go to, with child refugees being five times more likely to be out of school than the global average.

Leaders participating in the U.N. summits should spearhead a vigorous collective effort by governments, communities and the private sector to provide education, healthcare, psychosocial support and child protection to these vulnerable children, among other key actions vital for their well-being. A child’s refugee or migration status should never create a barrier to accessing these essential services. World leaders must act now to ensure we don’t fail millions of more children like Omran and Alan in the years to come. 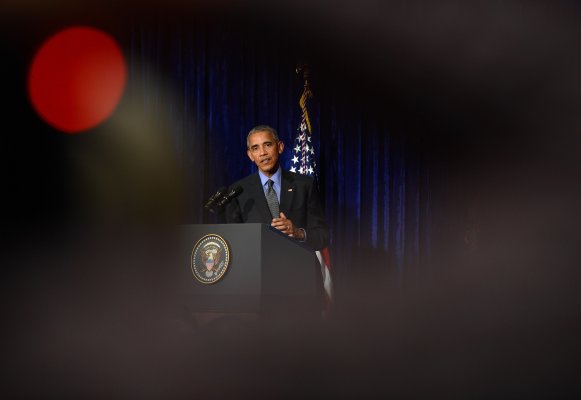 3 Ways President Obama Can Help Refugees
Next Up: Editor's Pick