Republican presidential nominee Donald Trump was interviewed Thursday by Dr. Mehmet Oz on the The Dr. Oz Show about his health. Trump also provided results from a recent physical exam.

Some takeaways: Trump says he takes a cholesterol-lowering statin, has not had heart problems or type-2 diabetes, and has no family history of cancer (he believes his dad may have had Alzheimer’s toward the end of his life). A letter from his doctor states that Trump’s blood pressure, liver and thyroid function are within the normal range. “People are amazed because I don’t get much with the colds,” he said on the show.

“When you are running for President I think you have an obligation to be healthy,” said Trump. While the accuracy of the data shared cannot be confirmed independently, here is what Trump and his doctor had to say:

Based on his body mass index (BMI), Trump is overweight. Trump’s physician says his height is 6 feet 3 inches, and that he weighs 236 pounds, which puts him at a BMI of 29.5, which is overweight according to the National Institutes of Health calculator. A BMI of 30 or greater classifies as obese. Trump says he wants to lose 15 to 20 pounds, which would put him at a weight that is considered healthy. He told Oz he’s “always been a little bit this way,” and that he wants to lose weight but it’s tough because of the way he lives. Weight loss relies largely on a person’s diet.

The segment did not include questions about what Trump eats. The Presidential candidate has previously said he likes fast food, and though there were initial unnamed audience members who told media outlets that he had said much the same on Oz, it was not in the final version of the show.

Trump does not drink alcohol. He spoke to Oz about his brother Fred, who was an alcoholic who told him not to drink or do drugs. Trump said he tells his kids, “No drugs, no alcohol, no cigarettes.”

Trump says he likes to golf, and that giving speeches give him exercise. “I am up there using a lot of motion,” he said. “These rooms are hot like saunas. I guess that’s a form of exercise.” Trump said he has not been golfing as much while running for president.

While there is evidence that fidgeting is better for a person than sitting all day, this does not provide the recommended two hours and 30 minutes of moderate-intensity aerobic activity exercise a week that’s recommended by the United States government. The CDC says people may need to do more than that amount each week to maintain their weight.

Trump says he feels running for President is stressful and doesn’t do very much to relax. Trump says going on vacation is more stressful for him. He says he does not like vacations when he can’t use a phone.

Overall, Trump, who is 70, says when he looks in the mirror he sees himself as age 35 and that when he hangs out with Tom Brady, a 39-year-old quarterback for the New England Patriots, Trumps feels like they are the same age.

Oz says he has invited both presidential candidates on the show, and that Democratic candidate Hillary Clinton is considering the offer. 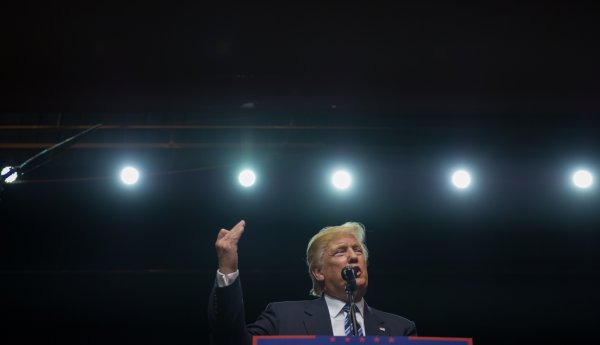 Read Donald Trump's Speech on Jobs and the Economy
Next Up: Editor's Pick