Slavery on America's College Campuses Went Beyond Buying and Selling

Vintage illustration of Georgetown University in 1830, from a series of prints of American historical colleges; lithograph, 1920.
GraphicaArtist / Getty Images
By Arica L. Coleman

Not long after Georgetown University President John J. DeGioia announced a plan to atone for the school’s active participation in slavery—which included the 1838 sale of 272 slaves, which kept the school financially afloat—the descendants of those slaves are now calling on the school to do more. Beyond the proposed monument and admission preferences, they are asking the university to partner with them to raise $1 billion to finance a reconciliation project. The group first raised $115,000 in seed money, which was the amount Georgetown received for the slave sale.

Their effort to extend the conversation beyond DeGioia’s statement is fitting, as it is worth remembering that the relationship between the slave economy and America’s academies did not stop at the sale of human beings. That continuing transaction is one of the points underlined by the research of Craig Steven Wilder, the foremost expert on the topic and the author of Ebony and Ivy: Race, Slavery and the Troubled History of America’s Universities.

Georgetown was founded in 1789 by John Carroll, the first Catholic Bishop in the U.S. As noted by Wilder in his chapter “War and Priest: Catholic Colleges and Slavery in the Age of Revolution” in Slavery’s Capitalism: A New History of American Economic Development, members of the Catholic clergy relied on the profits from several plantations for funding of church and campus alike. For the first 40 years of Georgetown’s existence, the college was tuition free, with the help of the funds provided by the slavery economy.

And the history of the Catholic Church and Georgetown University is hardly unique, as the colonial-era Protestant Church similarly invested and profited from a thriving slave economy while building institutions of higher learning based upon American Indian and African slavery. Many American universities were also built with the use of slave labor, and enslaved people were instrumental in the maintenance and daily upkeep of American college campuses.

Slaves were a ubiquitous presence on college campuses. As one Yale chronicler stated “it was common custom of the times to own Negro and Indian slaves. . .” Such slaves were used to attend the personal needs of the president, rectors, governors, faculty, students and campus grounds.

College presidents, many of whom were also slave owners, used slaves as personal attendants and as house servants to maintain the president’s mansion. Harvard president Increase Mather (from 1692-1701), used an enslaved man gifted to him by his son Cotton Mather, “to run errands for the college.” Harvard president Benjamin Wadsworth (1725-1737) brought his slave Titus, who lived with his family, to the college and “bought a Negro Wench” two days before arriving on campus. Benjamin Franklin, founder of the College of Philadelphia; the first eight presidents of the College of New Jersey (Princeton); and Georgetown presidents Fathers Louis William Valentin DuBourg (1796-1798) and Stephen L. Dubuisson (1825-1826), as Wilder’s research highlights, all acquired and used slaves for their own personal service during their tenure as the top college administrator.

Some faculty and students had their own personal servants as well. When a group of Harvard scholars and students came together about a decade ago to research the university’s historical involvement with slavery, they found that the Massachusetts school was home to many slaves during the 18th century, like Ciceely, a slave owned by Professor of Hebrew Judah Monis.

Campus chores were in abundance and enslaved people were burdened with the most arduous tasks, as according to Wilder:

In many ways, campus life echoed life on the plantation, as excess workers would be hired out to college-town locals, as demonstrated by a Dec. 19, 1826, advertisement from Washington College (now Washington and Lee University) that read:

(When hiring out slaves proved less profitable, Washington College, like Georgetown would, sold slaves to recoup some of its loses.)

The enslaved population on college campuses also endured physical and emotional abuses. They were often conscripted into entertaining students, or terrorized by them. For example, enslaved people at the University of North Carolina were often subjected to so-called pranks that in at least one case in 1811 involved students running wild while attacking their servants. They endured whippings, dismemberments, brandings, secret sales that disrupted family units and sexual assault. This resulted in emotional trauma, leading some to commit suicide.

Slavery is a horrible and painful chapter of American history, the legacy of which continues to haunt the nation. While some would rather ignore it, we must no longer deny its reality or its effects. As DeGioia, speaking to the Georgetown University community stated, “we cannot do our best work if we refuse to take ownership of such a critical part of our history . . . We must acknowledge it.” Indeed, the full depth of slavery’s contribution to early American academia must be openly acknowledged for truth and reconciliation to be fully achieved. 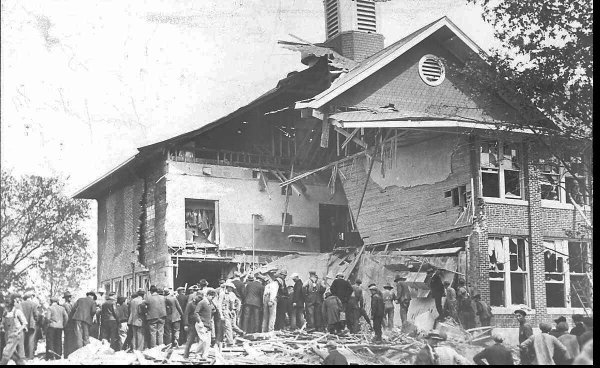 Why We Have Forgotten the Worst School Attack in U.S. History
Next Up: Editor's Pick