Alex Nowrasteh is an immigration policy analyst at the Cato Institute

One thing is clear from this presidential campaign: many Americans are scared of terrorists and immigrants. Donald Trump has managed to capitalize on that fear by conflating the two phenomena. The refugee crisis emanating from Iraq and Syria as well as recent attacks like the one in San Bernardino, Calif., have prompted calls for heightened immigration restrictions to keep our country safe. But is it really true that immigrants pose a unique terrorist threat?

No, actually. In a new analysis I just published at the Cato Institute, I look at every single terrorist attack committed on U.S. soil by an immigrant or tourist from 1975 to the end of 2015 and apply some basic risk analysis. Turns out, Americans should not be so worried: the chance of being killed in a terrorist attack committed by a foreigner is about 1 in 3.6 million per year.

That number includes the terrorist attacks on September 11—a dramatic statistical outlier bigger than any terrorist attack in history. The 19 hijackers entered the U.S. legally on visas—18 masquerading as tourists and one as a student. But 9/11 accounts for a whopping 98.6% of the 3,024 people killed on U.S. soil by foreign-born terrorists in the past 41 years.

Since that fateful day until the end of 2015, 24 people were murdered by foreign-born terrorists on U.S. soil. Fourteen of those 24 were killed by Saudi Arabian-born Tashfeen Malik in a December 2015 attack in San Bernardino.

These are brutal tragedies. But the number of murders, sad as each one of them is, doesn’t warrant the public alarm. In December of last year, 47% of Americans said they are “somewhat worried” or “very worried” that they or someone in their family will be a victim of terrorism. About 26% of Americans worried about immigration are most concerned with national security.

Reacting to the widespread fear, Trump has proposed an immigration ban on “terrorist countries” and even went so far as to call for a complete ban on Muslims entering the U.S. Some well-known conservatives including Larry Kudlow, David Bossie, and Ann Coulter have called for a complete moratorium on all immigration as a way to deal with terrorism.

Obviously, terrorists should not be allowed to come here. But too much damage is caused if the government bans everybody from certain countries just because somebody else born there killed Americans in a domestic attack. Think of it this way: from 1975 to 2015, more than 1.13 billion foreigners entered the U.S. legally and illegally. So, more than 28 million foreigners entered the country for each successful terrorist who actually managed to kill somebody in a domestic terrorist attack. Punishing 28 million innocent people—not to mention the countless Americans who want to marry the foreigners, hire them, or sell them products—is a gross overreaction to this danger.

The risk posed by immigrants varies depending on the visa type. Refugees and illegal immigrants are the most feared groups of foreigners on U.S. soil when it comes to terrorism. Twenty refugee terrorists have attacked or attempted attacks, but they only managed to kill three people—all in the late 1970s before the creation of the modern refugee screening system. The annual chance of being killed in a terrorist attacked committed by refugees is one in 3.6 billion a year. Ten illegal immigrants were terrorists, but they only managed to kill one person—meaning your chance of dying in a terrorist attack committed by an illegal immigrant is one in 10.9 billion a year.

Life is fraught with risk. From the dramatic, such as crime and terrorism, to the mundane, such as dying in car accidents or being crushed by furniture, risk is a part of our lives. Every action the government takes to reduce risk comes at a cost—which is often worth bearing. Using conservative estimates, the economic benefit of immigration and tourism is $229 billion a year. Security is important, but $229 billion accounts for many people’s livelihoods that could be disrupted or eliminated with immigration bans that will only slightly decrease the chances of being killed in a terrorist attack.

The U.S. government should continue to devote resources to screening immigrants for the purpose of excluding terrorists. Foreign-born terrorists could become deadlier in the future, but we should plan for the world we have and react to challenges as they arise rather than exaggerate manageable hazards. Hopefully, Cato’s new report will put the danger from foreign-born terrorism into perspective and provide guidance on how to allocate security resources to where they’ll do the most good. 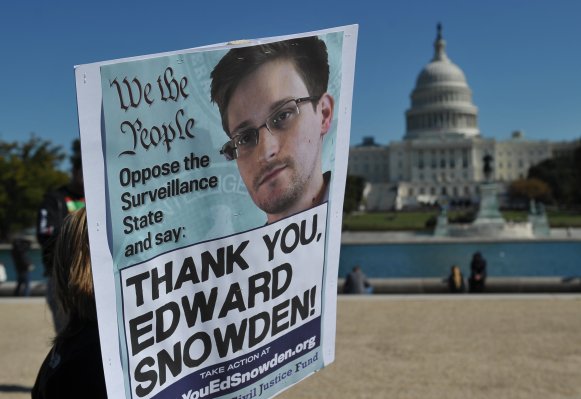 Snowden to Obama: Give Me a Pardon
Next Up: Editor's Pick