Security forces walk past lorries set on fire by protesters in Bangalore on Sept. 12, 2016, after the Supreme Court ordered the Indian state of Karnataka to release disputed water from the Cauvery river to the neighboring state of Tamil Nadu
Abhishek Chinnappa—Reuters
By Tekendra Parmar

At least one person was killed and several others injured when police fired on rioters in the southern Indian city of Bangalore Monday.

Violence erupted after India’s Supreme Court ordered the state of Karnataka to release water from the Cauvery river to the neighboring state of Tamil Nadu, Reuters reports. The river, which flows into Tamil Nadu from the south of Karnataka, has been a source of conflict between the two regions since the British colonial era.

According to Reuters, protesters pelted police with stones and set fire to vehicles. L. Chandrashekar, a senior police officer, said that at least 15 officers were injured during the riots. More than 35 buses were set ablaze and local metro services were suspended. The Indian Express reports that more than 200 people have been arrested.

There were also reports that protesters pulled over trucks with Tamil Nadu license plates, beating at least one driver.

Karnataka state was ordered to release 12,000 cubic feet of water per second every day to Tamil Nadu until Sept. 20. The river is the main source of water for the state’s rice crops and disputes over water are common, especially when there are droughts or weak monsoons.

A Supreme Court ruling in 1991, ordering Karnataka to release water to Tamil Nadu, left more than 18 ethnic Tamils dead in a similar outburst of violence.

Bangalore police tweeted that 15,000 riot police and border security officers have been deployed in the city to restore peace. 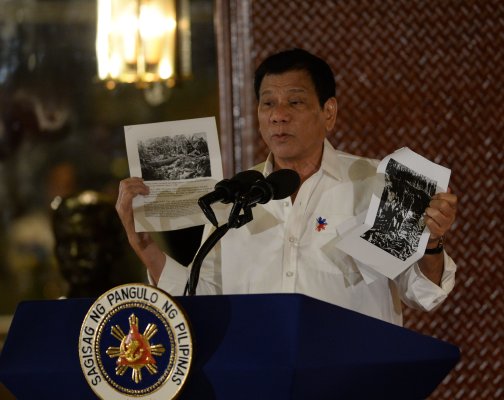 Philippine President Duterte Calls for Removal of U.S. Troops
Next Up: Editor's Pick