A pair of pants, a house key, children too young to walk. These are some of things that refugees have hurriedly picked up and carried when they fled their homes because of conflict or persecution.

A star-studded cast led by U.N. Goodwill Ambassador Cate Blanchett reads out a poem listing the items — some vital to survival, others sentimental — in a new video produced by the U.N. refugee agency, UNHCR.

“Over 65 million people across the world have been forced to leave everything behind them — everything — and start their lives again from scratch,” Blanchett said in a press release.

“As a UNHCR Goodwill Ambassador, I believe the very least each of us can do is work together to ensure refugees have the basics with which to build back their lives — an education, somewhere safe to live, the ability to work.”

The video was launched on Facebook Monday to promote UNHCR’s #WithRefugees campaign, which includes a petition urging governments to act with solidarity and shared responsibility in meeting the needs of refugees worldwide.

The petition calls for government commitments to ensure that refugee children have access to education, that all refugees have a safe place to live and the ability to work and contribute to their communities.

Almost one million people have already signed the petition, which will be presented to the U.N. General Assembly on Sept. 16, days before a U.N. summit on refugees and migrants.

More than 65 million people have been forcibly displaced worldwide, according to UNHCR. Of those, 21.3 million are refugees, who have fled their country of origin. More than half of them are under the age of 18. Some 10 million people are officially stateless, with no rights of citizenship.

UNHCR says that almost 34,000 people are displaced every day. 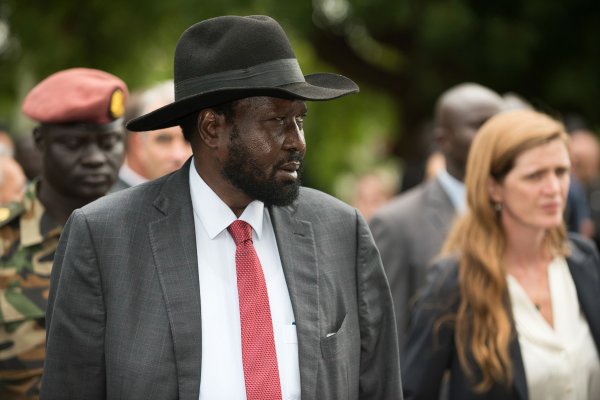 Meet the Rich Kids of South Sudan's Instagram
Next Up: Editor's Pick