Trump and Clinton Diverge Wildly on Questions of Science Policy

A major survey on science policy completed by Donald Trump and Hillary Clinton has laid bare a wide gap in how the two major party nominees for president would treat issues such as climate change, conservation and public health.

The Republican nominee expressed skepticism at the need for the federal government to weigh in on a wide range of scientific issues, and dismissed outright certain policy concerns. In contrast, the Democratic candidate offered detailed responses on what role the government should play on even the least glamorous of issues.

The survey, the product of a collaboration between 55 leading science groups representing 10 million scientists, included 20 topics from technology to public health where the President has some sway in policy.

Climate change stands out as perhaps the most egregious area of disagreement between the two candidates, given its stakes and the significant scientific consensus that humans have caused it. Trump, who has previously called global warming a “hoax,” referred to climate change in quotation marks and suggested that “there is still much that needs to be investigated.” Clinton offered an abbreviated recap of her plan to address the issue and called it “a defining challenge of our time.”

Global warming may be the issue with the most obvious contrast, but it is far from the only area where the difference is stark. On protecting ocean health, for instance, Clinton wrote more than 400 words, citing a federal law that protects fisheries and alluding to a plan to promote coastal restoration.

Trump wrote just two sentences on the same topic, saying he would “establish priorities” about how the federal government spends money (presumably with little room for oceans). Trump also questioned the premise of questions of biodiversity, public health and food. “The implication of your question is that there should be central control of American agriculture by the federal government,” Trump wrote in response to a question on food. “That is totally inappropriate.”

One area of agreement seems to be the desire for a vibrant space program. Both spoke to the inspirational power of space exploration and the way in which entering space promotes innovation more broadly. But even here Clinton offered a rough outline of her priorities for space while Trump spoke mostly in generalities about the need for a “vibrant space program.”

Science is not high on most voters’ lists of concerns this year, but the presidential election comes at a pivotal moment on many of these issues. Climate scientists say governments must act quickly to prevent catastrophic climate change. The federal space program is at a critical juncture as it reinvents itself to collaborate with private contractors. More immediately, fighting the infectious disease Zika needs funding and support from the White House.

The White House plays an important role in those areas and many others, setting the country’s agenda on science with budget requests for various programs. The President also directs the work of the Environmental Protection Agency (EPA) and other federal agencies like the Departments of Energy and Interior.

“Presidents, through the face of government and its institutions, set the tone of the public discussion around science,” said Shawn Otto, a science advocate and chair of the Science Debate nonprofit, last month. “Science is never partisan, but it is always political.” 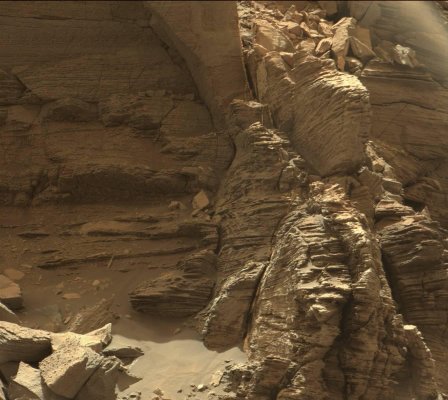 The Mars Rover Sent Back Some Pictures and They Look a Lot Like the American Southwest
Next Up: Editor's Pick