Retired U.S. soccer star Abby Wambach, who pleaded guilty to driving under the influence earlier this year, said she long struggled with alcohol and drug abuse until her high-profile arrest in April “humiliated” her enough to change.

The 36-year-old Olympic gold medalist and FIFA Women’s World Cup champion told the Associated Press that she was “stubborn” and “in denial” about her addiction to alcohol and prescription drugs for years. That way of living took a turn after she was arrested in Portland, Ore., and charged with driving under the influence of intoxicants—an incident that made national news.

“That night getting arrested was one of the best things that has ever happened to me. Because if I don’t get so publicly shamed and publicly humiliated, I don’t think I wake up,” she told the AP. “I think I was asleep for a lot of years. Asleep to the pleas from my family and friends, and even myself, to get help. So that night I was humiliated enough to wake up.”

The new interview comes ahead of Wambach’s memoir, Forward, which is set for release Tuesday and details many personal experiences, including her abuse of vodka and pills, which included Vicodin, Ambien and Adderall. Soon after the arrest, Wambach apologized to her fans on Facebook, taking “full responsibility” for her actions and promising that her “horrible mistake” would never be repeated.

She told the AP that she has been sober since pleading guilty and agreeing to enter a program for first-time offenders. “It’s really hard to talk about things when you’re ashamed,” she said. “And I’m not ashamed about what happened to me anymore because it led me to where I’m at right now. I’m proud of where I’m at.” 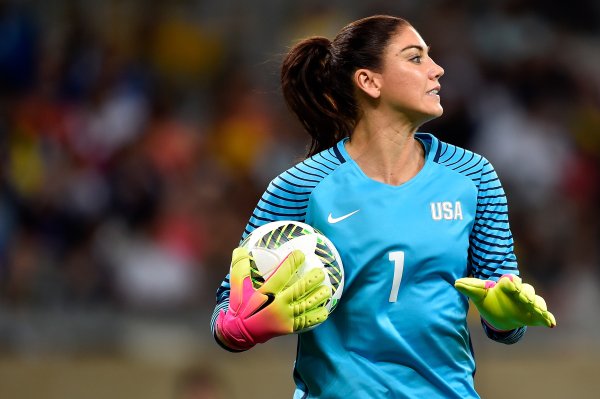 Watch Hope Solo Break Down as She Finds Out About U.S. Soccer Suspension
Next Up: Editor's Pick