Security tape stretches across the driveway of a home where an early morning fire killed multiple people in Memphis, Tenn on Sept. 12, 2016.
Karen Pulfer Focht—AP
By Melissa Chan

Nine people, including five children, died early Monday after a fire broke out inside a Memphis home in the deadliest blaze the Tennessee city has seen in almost a century, officials said.

Firefighters wept as they carried out the bodies of four adults and three children who died inside the house about 1:20 a.m., neighbors told USA Today. Two other children died after being taken to the hospital, and another child is fighting for his life, Memphis Fire Services Director Gina Sweat said at a news conference.

“I’ve never seen firemen cry, but they were bawling like babies when they brought the children out,” the family’s neighbor, Firid Shoundra Hampton, told USA Today. “We’ve all lived over here for 40 years and we are just devastated.”

Sweat said firefighters and paramedics were visibly shaken after responding to the “most tragic loss of life in a single fire incident since the 1920s.”

“Nothing in our training could truly prepare us for this heartbreaking event,” Sweat said. “As I walked among the firefighters and the paramedics on the scene this morning, I could see the pain in their eyes, and I could feel the heavy emotions in their hearts. They were emotionally drained.”

The cause of the fire is under investigation.

The Commercial Appeal said family members identified three of the deceased adults as Carol Collier, 56; LaKisha Ward, 27; and Eloise Futrell, 61. The children ranged in ages between 3 and 16, according to the newspaper.

“They are all gone,” Futrell’s niece, Elisa Weathersby, told USA Today. “Our hearts are ripped in two.” 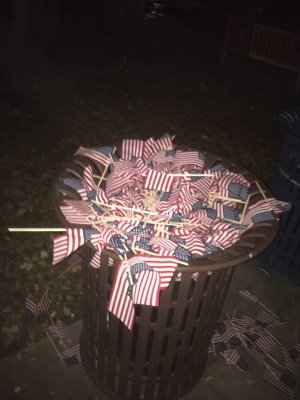 Occidental College Republicans Slam ‘Vandals’ Who Destroyed Their 9/11 Memorial
Next Up: Editor's Pick