Six years ago, Nobel laureate Aung San Suu Kyi was under house arrest for opposing one of the world’s most brutal military regimes. Today, at 71, she is the de-facto leader of a newly-democratic Burma.

Suu Kyi will arrive in Washington D.C. on Sept. 14 to meet with President Barack Obama, Vice-President Joe Biden, members of Congress and business leaders. Much has changed since her last visit in 2012, shortly after her release from detention.

Hundreds of political prisoners have been freed, a peace process is underway to resolve one of the world’s longest civil wars, and a historic election last November peacefully unseated a military-backed government. Suu Kyi’s final U.S. visit before Obama leaves office will close one more chapter in Burma’s dramatic narrative of democratic awakening. Here’s what you need to know:

She’s in charge now. Sort of

Suu Kyi and her party the National League for Democracy (NLD) took power in April after a landslide win in November elections last year — the country’s first freely contested vote in 25 years. Despite her popularity, the country’s military-drafted constitution bars her from becoming President. So, she invented a new role for herself — that of state counselor — with powers beyond the presidency.

Suu Kyi installed her close friend and ally, Htin Kyaw, as head of state, and appointed herself as both minister of the president’s office and foreign affairs. Her role as state counselor is similar to a prime minister; it gives her broad access to all branches of the government. President Htin Kyaw and the majority of the new parliament are viewed as loyal party members that dutifully execute her policies.

Her chief limitation is that her powers don’t extend to the armed forces, which still has control of three key ministries: home affairs, border affairs and defense. Burma’s army, known locally as the Tatmadaw, also enjoys a guaranteed quarter of parliamentary seats and thus the generals have veto power over any proposed changes to the country’s constitution.

She holds the keys to U.S. sanctions relief

Burma, officially known as Myanmar, has been subject to crushing economic sanctions since the mid-1990s, which were put in place to punish the regime for human rights abuses. An arms embargo, a ban on jade and ruby imports and a targeted blacklist of individuals and entities are still in effect.

Suu Kyi is the single biggest influence on American sanctions policy towards Burma. In 2012, Obama announced that sanctions would be eased as a reward for democratic reforms. In May, the U.S. tweaked certain sanctions to encourage foreign investment and financial reform in the frontier market of 51 million people.

“The steps were designed overall to help remove some of the obstacles to economic growth and maintain the overall authority for the sanctions,” U.S. Ambassador to Burma Scot Marciel told TIME in May, “because, obviously the democratic transition is still incomplete.”

Some local and foreign businesspeople have recommended lifting all remaining sanctions. Opposition lawmakers even tabled a request in parliament last month to petition the U.S. for a blanket removal of all sanctions on the grounds that they were crippling development. Rights groups advocate for keeping most remaining sanctions in place to maintain leverage over the military.

While reopening diplomatic and economic ties to Burma in 2012 initially caused controversy — it meant dealing with a military that has been accused of war crimes and ongoing human rights violations — most experts now agree that it was the right thing to do.

America’s re-engagement policy began during Democratic presidential nominee Hillary Clinton’s tenure as Secretary of State. An entire chapter of her memoir, Hard Choices, is devoted to Burma’s democratic transition. She has referred to Suu Kyi as a “friend,” and even made a reference to her role in Burma during her 11-hour Benghazi hearing.

“I worked with Republican leader, Senator Mitch McConnell, to open up Burma, now Myanmar, to find democratic change,” she said in her opening remarks.

The pair have met at least three times since 2011, when Clinton became the first U.S. Secretary of State to visit Burma since 1955. A Clinton presidency would be viewed favorably by many people in Burma, as she is expected to maintain Obama’s “Asia rebalance” policy. A spokesperson for Burma’s ministry of foreign affairs, Aye Aye Soe, told TIME that she was unaware of any plans for Suu Kyi to meet with Clinton while in the U.S.

But it is viewed as a loss for China

Over the course of 60 years of military rule, in which the Southeast Asian nation isolated itself from the West, Burma’s military government forged close ties with neighboring Beijing. China is Burma’s biggest trading partner; the two share a long and porous land border. But opening up to the rest of the world has challenged China’s dominance in resource-rich Burma.

Shortly before handing over power to a quasi-civilian government, the Burmese regime signed deals with Beijing for major energy projects, including gas and oil pipelines and a number of mega-dams meant to power parts of China’s southern Yunnan province. Frustratingly for Beijing, some of those agreements may be reconsidered as Burma diversifies its allies and streamlines investment policy.

The most high-profile example is the Myitsone hydropower project in northern Burma’s Kachin State, where ethnic rebels are still at war with the central government. The project was put on hold by former President Thein Sein, and now Suu Kyi is left with the awkward task of either allowing China to proceed with the highly unpopular development or reneging on the deal.

Richard Horsey, an independent political analyst based in Rangoon, told TIME via email that Burma’s improved relations with the U.S. “are cause for concern in some policy circles in Beijing,” but that ultimately Suu Kyi has been able to convince China’s leaders that there is “no contradiction between being sensitive to China’s interests and closer U.S. relations.”

A litany of challenges await back at home

Suu Kyi will return to Burma with stronger ties to both the U.S. and the U.K. — where she is reportedly meeting Prime Minister Theresa May before arriving in the U.S. And she will need them.

Decades of corrupt, authoritarian rule destroyed the economy, health and education systems, and the population faces a drug crisis as the world’s second-largest source of opiates.

While rich in resources such as gems, timber, coal and natural gas, Burma is one of Asia’s poorest and least developed countries. Most of the nation’s resources are located in areas populated by ethnic minorities, where more than 20 armed resistance groups have been vying for autonomy for decades. A peace process that was started under Thein Sein culminated in a partial ceasefire agreement in October last year, but the pact was mostly symbolic. Suu Kyi has recently resumed the talks, but fighting still flares in the east and northern reaches of the country.

On Burma’s western shore, almost a million Rohingya Muslims remain stateless. Communal violence that flared up in 2012 has left more than 100,000 Rohingya in squalid displacement camps, where conditions are so dire that many have chosen to flee on dangerous boat journeys.

“The human rights challenges facing Burma will be the same when Suu Kyi returns from her U.S. trip as when she left,” David Scott Mathieson, a senior Burma researcher for Human Rights Watch, told TIME, “but she will return to them most likely buoyed by increased international support for what she has achieved so far.” 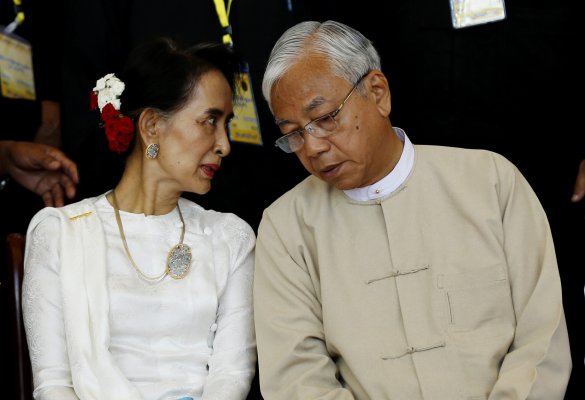