After a week of questionable press, independent presidential candidate Evan McMullin took to Northwest Washington, D.C., on a steamy Saturday evening to officially introduce himself.

The Stand Up America PAC, which is backing McMullin, hosted an evening with the candidate at the home of Juleanna Glover, a political consultant and Washington insider, on Saturday evening. The snacks offered—assorted pizza slices, sushi, homemade pop tarts from local favorite Ted’s Bulletin and macaroons—were about as unconventional as the candidate who weaved about the room, mingling with guests, snapping pics, and explaining his platform.

Some guests were enthusiastic about the idea of a McMullin candidacy, while others were just there to feel things out. Around an hour into mingling, McMullin briefly addressed the gathered crowd, explaining his vision for a “new conservative movement” in America. As a former CIA officer charged with recruiting assets within terrorist organizations who fed information to the U.S. government in the wake of 9/11, he wears his patriotism on his sleeve, even tearing up at the mention of Americans standing up for American values during a Q&A with Bill Kristol.

But as an Establishment Republican who served as policy director for the House Republican Conference, he says the party has lost its sense of commitment to liberty. The movement he’s hoping to shepherd would recommit itself to liberty while also affirming the U.S.’s commitment to tolerance.

“I believe the opportunity in this country is in this—liberty and tolerance,” McMullin said. “I believe that we have an opportunity to move the conservative movement forward with ideas that shouldn’t be so difficult like acknowledging climate change … respecting the fact that not everyone will believe in the way we believe.”

In just a month, McMullin said, between 145,000 and 150,000 people have either signed up to volunteer, donated, or signed up for their email lists, healthy but still small numbers for a national presidential campaign. In Utah, where the grassroots campaign is headquartered, about 5,000 people have signed up to volunteer and there’s genuine interest in states like Wisconsin and Iowa. The majority of the support he said is happening on its own, without any infrastructure provided by the campaign.

The most surprising aspect of his campaign, he said, is how many Bernie Sanders supporters—who many assumed would vote for Trump given their aversion to Clinton’s policies—have vowed to support him, even though not all of their ideas align. “There is something very grassroots and organic about what is happening in response to this campaign,” he said. “It’s truly encouraging and for me as a candidate, it’s humbling.”

It true that there is an appetite among Americans in the abstract for a third-party alternative. About 42% of American voters consider themselves independent—though most end up voting for the same party over and over in the privacy of the voting booth—and polls show Clinton’s lead narrowing when voters have the option of picking between four candidates, including Green Party candidate Jill Stein and Libertarian Gary Johnson, though historically that hasn’t translated to as many votes on Election Day, and even their role as spoilers is often overstated.

Read More: The Myth of the Libertarian Spoiler Candidate

Still, McMullin got emotional talking about the ways in which his supporters have confronted some supporters of Donald Trump who have written bigoted comments on social media, calling it proof that Americans are willing to stand up for the nation’s values even when their leaders fail to do so.

McMullin fully recognizes that he’s an unconventional, and quite frankly, a long shot candidate. After launching his campaign a little over four weeks ago, the biggest question raised about him in the press has been who his Vice Presidential pick will be, after it was reported that the man who appears with him on several ballots is merely a stand-in. Campaign officials suggested to TIME there will be a candidate soon, though no official date was given. According to one official, they are vetting about 10 candidates, half of whom are people of color and three of whom are women.

Though McMullin and his team are enthusiastic, he fully understands that the odds are stacked against him. He’s in the midst of trying to access the ballot in the majority of states; his team hopes to be on the ballot or a write-in candidate in at least 40 states. His hope is to win by losing, essentially. If he’s able to pull enough Electoral College votes to block Hillary Clinton and Trump from winning outright, it would be up to the House of Representatives to decide the race. In this scenario, McMullin thinks he could have a real shot at winning. That, of course, also depends on whether or not one candidate has a clear Electoral College lead over the other. What’s more, what the McMullin campaign is hoping for hasn’t happened in American politics since the 1800s.

But, Evan McMullin is a passionate man, keen on reintroducing themes of tolerance and unity to the conservative moment in America. On a hot early September evening in Washington, his eyes welled with tears as he explained to TIME why he felt his longshot candidacy couldn’t wait; that holding off action until after the election would be too little, too late.

“Republican leaders will be judged by their actions during the election, not their explanations after,” he said. “I refuse to stay silent while the Republican nominee aligns with a foreign adversary and promotes intolerance across our country.”

Correction: The original version of this story misstated the number of volunteers for the McMullin campaign in Utah. It is about 5,000, according to McMullin. 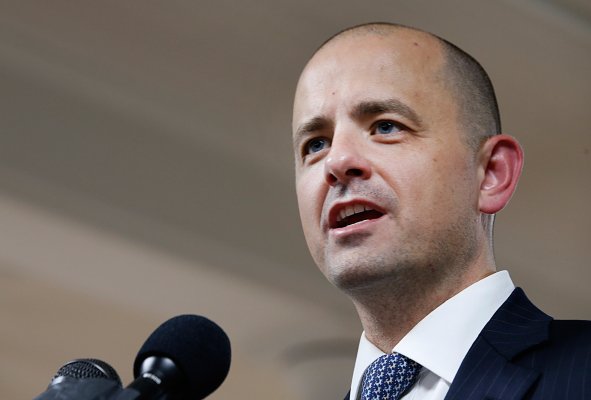