One Difference Between Donald Trump and Outsider Candidates of the Past

Republican presidential candidate Donald Trump delivers a speech during the evening session on the fourth day of the Republican National Convention on July 21, 2016 at the Quicken Loans Arena in Cleveland, Ohio as shown on a television screen in Brooklyn, New York.
Robert Nickelsberg—Getty Images
By David Kaiser

Donald Trump is not the first major presidential candidate to have won his party’s nomination despite the opposition of its establishment, or the first from outside the mainstream of American politics.

William Jennings Bryan in 1896, Barry Goldwater in 1964 and George McGovern in 1972 all fit that description—and the last two of those went down to crushing defeat. (Bryan lost too.) But whether or not Trump wins the election, he will surely do much better than either Goldwater or McGovern. Trump at this point figures, by some calculations, to win about 42% of the popular vote in a three-way race, while neither Goldwater nor McGovern broke the 40% barrier. He also seems very likely to win more than 200 electoral votes, compared to 52 for Goldwater and 17 for McGovern.

What is behind that difference?

One major factor is that our elites have lost the power to exclude certain candidates, largely because we no longer have anything resembling a national media. Trump is the first candidate to have taken full advantage of this situation.

Barry Goldwater ran for President as a conservative Republican in 1964 at a moment of extraordinary national consensus. That consensus owed a good deal to a sense of common purpose in the wake of John F. Kennedy’s death, but it also reflected genuine agreement among most Americans on the nation’s biggest problems, and a broad sense of faith in government. Democrats and most leading Republicans accepted the major achievements of the New Deal, including Social Security, the rights of organized labor and the strict regulation of the financial sector. They also accepted the containment strategy for dealing with international Communism. And although the civil rights movement and the Civil Rights Act of 1964 earned Lyndon Johnson the enmity of the white South, that law had passed with substantial majorities from both parties.

Goldwater, however, stood outside the mainstream on all of these issues. He had said that social security should be voluntary, he wanted to sell the Tennessee Valley Authority, he had voted against the Civil Rights Act and he showed an alarming willingness to make use of the nation’s nuclear arsenal. The coverage of him in the nation’s major newspapers and magazines and on the three networks focused on these positions, painting him as an irresponsible extremist. Several leading Republicans, led by New York Governor Nelson Rockefeller, refused to support him. Both Goldwater and the Republican Party sustained a devastating defeat.

By this time the consensus of 1964 had been destroyed by the Vietnam War and the cultural changes among the youth of America. Even though the elite media by 1972 had turned against the Vietnam War, McGovern and his long-haired supporters also seemed to be outside the cultural mainstream, and a number of elected Democrats refused to support him. The problems within his campaign, rather than what he stood for, became the story that the major media focused on. Nixon won an overwhelming victory without debating him—in fact, without much campaigning at all.

The major media in those days could do more than rule a presidential candidacy out of bounds. Walter Cronkite in 1968 had played a key role in persuading Lyndon Johnson not to escalate the Vietnam War by declaring that the war was bound to end in stalemate. The Washington Post in 1972-3 kept the Watergate story alive until the rest of major media joined in. The media represented a national consensus on many major issues.

Today, many leading Republicans—most of them, to be sure, now retired from office—are refusing to support Donald Trump. And major media outlets have published numerous exposés of Trump’s business failures, unsavory practices and falsehoods. Yet unlike Goldwater or McGovern, Trump has a real chance of winning the election.

The establishment no longer speaks through mass media that command the attention and respect of the American people at large. The readership of major newspapers and news magazines and the viewership of the old broadcast networks has shrunk drastically, and there is no media outlet that plays a role remotely comparable to the one CBS Evening News did 40 years ago. Outlets are splintered, with a choice for every political leaning. No single channel or newspaper could sway the election.

The consensus that kept us on an even keel in the decades after the Second World War grew out of a record of sustained achievement both at home and abroad. The United States had vastly improved the living conditions of the lower half of the population, crated a new middle class, defeated Germany and Japan, and held the line against the USSR in the Cold War. Supporting that consensus were the few national media outlets, united in the narrative they presented. 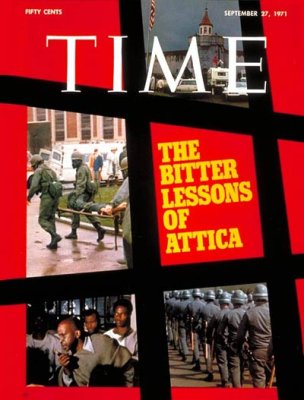 Attica at 45: 'Events That Have Shaken the American Conscience'
Next Up: Editor's Pick