This Is How The World Is Remembering 9/11

Sunday marks the fifteenth anniversary of 9/11, and places in the United Sates and around the world are planning tributes to the victims of the terror attacks that claimed nearly 3,000 lives.

Here’s a sampling of some of the memorial events planned for the next week.

Joe Biden at an NFL game

U.S. Vice President Joe Biden will participate in a first responders tribute before the Philadelphia Eagles game on opening weekend of the NFL season, the LA Times reports. Biden will participate in a ceremony before the game and stand with 120 police officers, firefighters and emergency responders during the national anthem. (The Baltimore Ravens are also planning a tribute before their game, which includes a live bald eagle landing on the field.)

A Staten Island artist recreated the Twin Towers out of thousands of lights strung together. The installation, called “3,000 raindrops” in reference to the lives lost in the attacks, debuted on Thursday and will be kept up until September 25, SILive.com reports.

Firefighters in the United Kingdom will observe a moment of silence at the time the first plane hit one of the Twin Towers, the Daily Mail reports. Other offices and some radio and television networks are also expected to fall silent.

British government leaders and about 2,000 people will also attend a memorial service at St. Paul’s Cathedral in London on Wednesday.

The New York Stock exchange also held a moment of silence Friday morning to remember the victims of the attack.

Bagpipers from the New York City fire department and The Red Hot Chili Pipers, a Scottish bagpipe band, have come together to record a 9/11 tribute song called “The Fallen,” the New York Daily News reports. All proceeds from the song will go to the Scottish Fire and Rescue Family Support Trust and The FDNY Pipes and Drums.

The 9/11 memorial will once again run its “Tribute in Light,” 88 searchlights that shine as a representation of the Twin Towers, NY1 reports. The tribute has gone up every year since 2002.

Mourners gathered at Ground Zero for an annual ceremony remembering the victims from the attack. Presidential candidates Hillary Clinton and Donald Trump were in attendance.

President Barack Obama joined Defense Secretary Ash Carter and Marine Corps Gen. Joe Dunford to commemorate the victims during a ceremony at the Pentagon on Sunday morning. Obama addressed the nation Saturday in a video released by the White House.

Mourners observed a moment of silence and then the ringing of the Bells of Remembrance at the in Pennsylvania, to remember the hijacked Flight 93 that crashed outside Shanksville, Pennsylvania, away from its intended target after those aboard the plane diverted the plane. 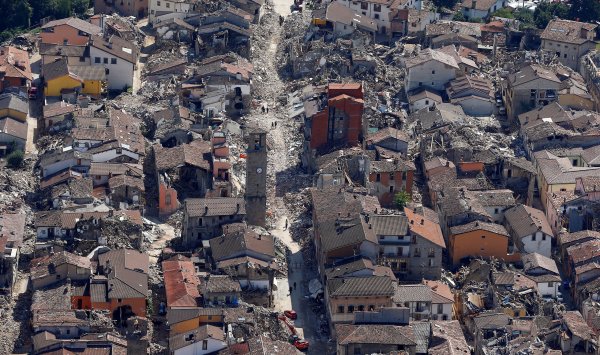 Cat Rescued After Two Weeks Trapped in Rubble From Italian Earthquake
Next Up: Editor's Pick