Donald Trump criticized the state of the America’s media and its leader on Thursday in an interview aired on a state-owned Russian television network.

In an interview with journalist Larry King broadcast on RT America, Trump said the thing that most surprised him about the American political process was “the dishonesty of the media,” the Washington Post reports. “The media has been unbelievably dishonest,” he said. “I mean they’ll take a statement that you make which is perfect and they’ll cut it up and chop it up and shorten it or lengthen it or do something with it.”

He also voiced familiar criticisms of President Barack Obama and Democratic nominee Hillary Clinton. “Hillary Clinton with her policies and Barack Obama — you know, look, we should have never gone into Iraq. Period,” Trump said. (Trump claims he was against the invasion of Iraq from the beginning, which is not true.) “But once we went in, Larry, we shouldn’t have gotten out the way we got out. And the way they got out really caused ISIS, if you think about it. We got out in such a horrible, foolish fashion, instead of leaving some troops behind.”

The interview comes as Trump continues to struggle with allegations that he’s too close to the Russian government. In July, he called on Russia to hack Clinton’s emails. His former campaign chairman Paul Manafort resigned in August over questions about his links to Ukraine’s former pro-Russia regime. And Trump himself expresses open admiration for Russian President Vladimir Putin. Wednesday night, one day before the interview aired, Trump said of Putin in an NBC military form, “Certainly, in that system, he’s been a leader, far more than our president has been a leader.”

Trump’s campaign claimed they did not know the interview was to be aired on the Russian network. A spokesperson told the Post, “Mr. Trump recorded a short interview with Larry King for his podcast as a favor to Mr. King. What Larry King does with the interview content is up to him; we have nothing to do with it.”

He’s not the only politician to appear on the network, accidentally or otherwise. British politician Nigel Farage, who appeared onstage with Trump in August, makes regular guest appearances and was recently offered his own television show on RT, according to media reports. 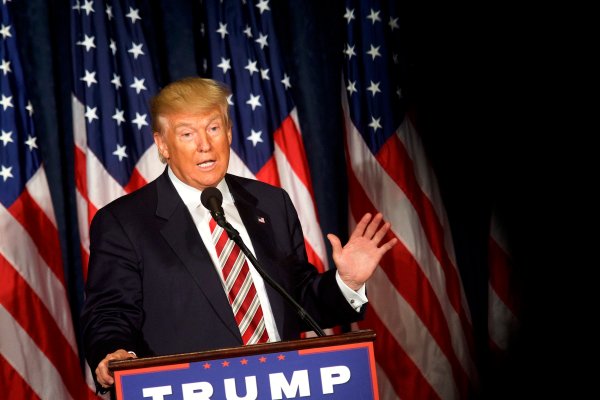 Trump Again Claims That He Opposed the Iraq War
Next Up: Editor's Pick