A Wearable Pokémon Go Device Is Set To Launch Next Week

For all the Pokémon Go lovers who are looking to amplify their monster-hunting game, good news: Pokémon Go Plus, Nintendo’s wearable accessory, will be available Sept. 16.

The developer, Niantic Labs, announced the the wearable device will be available in “most countries” next week.

Pokémon Go Plus was supposed to be launched in July, but the company pushed back the release without giving a reason, according to The Verge. The device is supposedly sold out at both Amazon and Gamestop.

The $35 device works via Bluetooth Smart—a low energy connection that’s designed for health and fitness apps. It vibrates and lights up when Pokémon and Pokéstops are near, and can be worn on a user’s wrist or as a pin.

Its goal, according to Niantic, is to “blend Pokémon Go even more seamlessly into family and fitness activities.” Players will be able to collect Pokémon using Pokémon Go Plus instead of using the app on their phone.

And maybe that’s for the best. Pokémon Go has been criticized for causing distractions, especially after one 15-year-old teen crossed a busy highway and was hit by a car when pursuing a Pokémon, and two men walked off a cliff in California while playing the game.

The game has also been blamed for causing robberies and mild injuries, and a previous report said it has caused a surge in trespassing.

The Verge reports that although widely still popular, the game’s popularity has dipped since its launch, dropping from 45 million active users in late July to 30 million in mid-August. 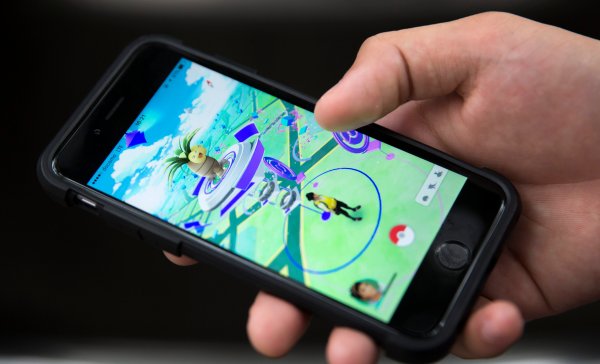 Russian Could Be Jailed After Playing Pokémon Go in Church
Next Up: Editor's Pick