Donald Trump Again Claims That He Opposed the Iraq War

Donald Trump disputed the indisputable Thursday in a speech at a school in Cleveland as he argued that he never supported the Iraq War.

“Had I been in Congress at the time of the invasion I would have cast a vote in opposition,” Trump said, as his campaign deviated from a planned speech on education reform to relitigate the early 2000s.

The long list of Trump comments on Iraq seemingly begins on Sept. 11, 2002, just weeks before the invasion vote, when Trump was asked by radio host Howard Stern whether he supported going into Iraq. “Yeah, I guess so,” he replied. Trump also pointed to a January 2003, two months before the invasion, when he maintained he expressed doubts about the war to Fox News host Neil Cavuto. Trump cited Bush’s declining poll numbers, encouraging him to focus on the economy. But on the war, he was far from clearly opposed.

“Well, he has either got to do something or not do something, perhaps, because perhaps shouldn’t be doing it yet and perhaps we should be waiting for the United Nations, you know,” Trump said.

The hodgepodge of deflections and explanations offer a microcosm of Trump’s approach to all contentious policy issues in this campaign, in which he has deliberately eschewed facts in order to appeal to all sides of a debate.

Trump maintained Thursday that no one really cared about his opinion on Iraq, though just hours before claimed the question from Howard Stern proved people respected his foreign policy thinking.

Speaking in Cleveland at an event that was supposed to be focused on education reform, Trump railed against the “dishonest media” for correcting his flawed timeline. It follows a pattern for Trump, who has sought to undermine and discredit for reporting on his long history of controversial remarks.

“I opposed going in and I opposed the reckless way Hillary Clinton took us out, along with President Obama,” he said. Even that proves to be more complicated than Trump made it out to be, as he called for an early withdrawal before even becoming a critic of the Obama drawdown.

At best, Trump is hoping to cast himself as a natural foreign policy expert, though even cursory examination of his record reveals cracks in that narrative.

At worst, Trump believes he’s at least dragging Clinton into the mud, dredging up vote that is still a sore point for her liberal supporters which tarnishes her claims to foreign policy mastery.

But in a 2006 interview, Trump told the New York Times that Clinton should get a pass on the vote—much as he has since given his vice presidential nominee, Indiana Gov. Mike Pence a pass for the same decision.

“Don’t forget that decision was based on lies given to her,” he said. “She’s very smart and has a major chance to be our next president.”

Katie Reilly contributed to this report 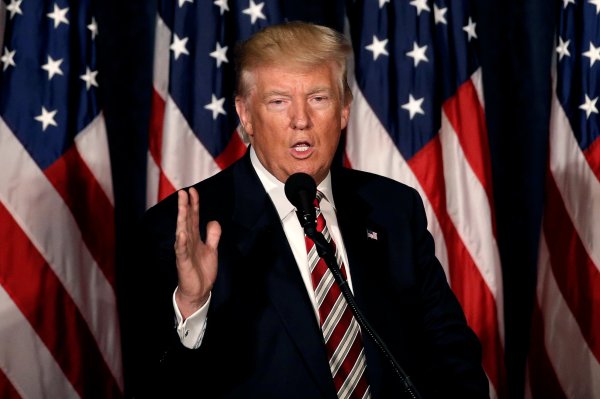