A Man Wrongly Tortured for 9/11 Remains in Guantanamo

A protestor calling for the closure of the Guantanamo Bay Prison on January 11, 2016, in front of the White House.
MANDEL NGAN—AFP/Getty Images
Ideas

Wednesday evening, Hilary Clinton and Donald Trump engaged in some election-year pot-banging about national security. Trump vowed to engorge the military and defeat ISIS with a secret plan. Clinton promised to stay the course set by President Obama. But before we settle into this permanently militarized future, we should recall the wreckage in our wake.

If there is a symbol of the U.S. torture program, he sits today in solitary confinement at a U.S. prison in Cuba. Zayn al Abidin Muhammad Husayn, known to the world as Abu Zubaydah, was the first person cast into a CIA black site and the first subjected to its “enhanced” interrogations.

He is the person for whom lawyers in the Bush Administration wrote the infamous torture memo, which freed CIA contractors to brutalize him with impunity. He is the only man in the world to have endured all of the authorized enhancements, though he also suffered many techniques—like “rectal rehydration”—that were never approved.

Why was the CIA so eager to torture this man? We know what some in the intelligence community believed at the time. He was a senior leader in al-Qaeda and a close associate of Osama bin Laden. He personally trained some of the 9/11 hijackers, and his bloodstained fingerprints were all over al Qaeda’s previous operations. That, at least, was the claim made by the highest officials in the Bush Administration, beginning with the president.

Since that time, of course, the rest of the world has learned what some of us have known for many years. In 2014, the Senate Select Committee on Intelligence completed what is by far the most comprehensive study of the CIA rendition and interrogation program. The Committee examined over six million pages of primary source material from the CIA.

From its meticulous review, the Committee concluded the Agency was, to put it gently, mistaken. Zubaydah was never a member of al-Qaeda, let alone one of its high ranking officers. He had no connection either to the attacks of 9/11 or to al Qaeda’s terror. This, of course, is precisely what Zubaydah told his torturers over and over, perhaps as he was strapped once more to that water-soaked board, stuffed again into that coffin built just for him or hung again from the hooks in the ceiling at the black site outside Bangkok.

In 2006, the CIA transferred Zubaydah to Guantanamo, where he remains. But unlike other CIA prisoners whose interrogations were “enhanced,” Zubaydah has never been charged with a crime, either in a federal court or a military commission. In fact, he has never appeared in a court of any kind, whether military or civilian, kangaroo or conventional.

And if the United States has its way, he never will. As his torture began, his interrogators sought and received “assurances” that he would “remain in isolation and incommunicado for the remainder of his life.” Assurances were immediately forthcoming: CIA headquarters responded that “all major players are in concurrence that [Abu Zubaydah] should remain incommunicado for the remainder of his life.” Apart from a select few—including the men who tortured him, a handful of other prisoners and government functionaries and his lawyers, myself included—no one in the world has heard him speak since 2002.

He was recently seen on video for a few minutes at Guantanamo’s parody of a parole hearing. The notion of a parole hearing for a person who has never been convicted is an oxymoron, but nothing about Guantanamo can be likened to legal forms. And there would be no more than this “fleeting glimpse.” Zubaydah was not allowed to speak, lest the world might listen.

Worse, my co-counsel Mark Denbeaux, a law professor at Seton Hall, had planned to attend the proceeding to speak on Zubaydah’s behalf. If Zayn cannot speak, at least we might speak for him. But at the last minute, Mark had to cancel his flight to be at his wife’s bedside as she went through emergency surgery. We pleaded to set the hearing back a few days. The government was unmoved. The silence continues.

We have no illusion that Abu Zubaydah will be cleared by this Alice-in-Wonderland tribunal. The unbridgeable gulf between patriotic myth and tortured reality embarrasses the United States, which has never been good at atoning for its mistakes—at least, not so long as they can still speak.

We have tried to impart all this to our client, but we can never be sure how much he understands. He still has shrapnel lodged deep in his brain from when he was fighting the communists in Afghanistan, back when Ronald Reagan and other brave hearts thought it was a good and honorable thing to be a mujahid, whom Reagan repeatedly described as “Afghanistan’s freedom fighters.” And of course, Zubaydah’s mental and physical state suffered a great deal at the hands of the CIA.

Meanwhile, the Obama Administration winds down. A few more prisoners will be released from Guantanamo before January 2017, but Zayn will not be among them. And as Wednesday’s choreographed display made clear, neither of the current contenders for the Oval Office give a damn about what happens next on our desolate island prison, so the future holds little hope.

Having tortured him, they seem to figure it is better that he be silenced and best that he be forgotten, at least until he dies. After all, that is the assurance we provided to his torturers. Then we can be great again. 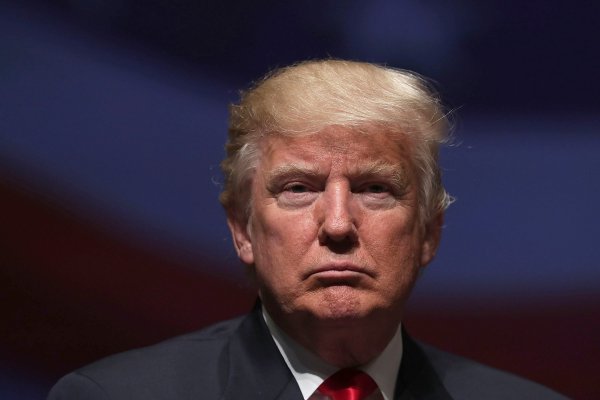 Why ISIS Supports Donald Trump
Next Up: Editor's Pick