This is What Presidential Candidate Gary Johnson Should Know About Aleppo

Libertarian Party nominee Gary Johnson has caused outrage after asking “And what is Aleppo?” live on Morning Joe when questioned about the war-torn Syrian city.

Social media predictably went into meltdown, with #WhatisAleppo quickly trending on Twitter and many users expressing their disbelief that the presidential candidate did not recognise the name of the city, which has regularly been in the news since 2011.

The former New Mexico governor later said that he had misheard the name of the city at the heart of the Syrian civil war and refugee crisis and at first thought it was an acronym. Here are a few facts that will help him and anyone else avoid confusion in future.

Aleppo’s history is as ancient as Damascus; it is considered to be one of the longest continuously inhabited cities in the world, won and lost by a succession of empires, sacked by myriad invaders and reduced to rubble by epic earthquakes.

A UNESCO World Heritage Centre with its thousands of old limestone houses and winding old streets, Aleppo has been mentioned in Egyptian texts from as early as the 20th Century BC.

Following the advent of Islam and into the medieval era, Aleppo became a hub of the Silk Road, a giant entrepôt pooling in all the riches of China and India for buyers further west, north and south.

By the 16th century, numerous European merchant houses set up shop to try to get a piece of the action; Aleppo’s far-reaching allure is exemplified by its mention in Shakespeare’s Macbeth, when one of the witches speaks of a sailor’s wife: “Her husband’s to Aleppo gone, master o’ th’ Tiger.”

A sweeping view of Aleppo, Syria, on Oct. 5, 2006. Aleppo was famous for its architecture, attractive churches, mosques, schools and baths, and became an important center of trade between the eastern Mediterranean kingdoms and the merchants of Venice.
Eric Lafforgue—Gamma-Rapho/Getty Images

Following Syrian independence in 1946, the city’s population expanded from 300,000 to about 2.3 million by 2005 as it steadily became the country’s industrial and financial center, rivaling the capital, Damascus. Today it lies in ruins, thousands of its inhabitants have been killed and the population is estimated at 250,000

Aleppo’s decline began when it suddenly became a key battleground in July 2012, when rebel fighters launched an offensive to oust government forces and gain control over northern Syria. Since then, it has remained at the heart of the struggle between the regime of Bashar Assad and the rebels attempting to oust him.

The seizure in June of the Castello Road, the last remaining route into the rebel-held eastern section of Aleppo, by pro-government forces aided by Russian air support, made life incredibly difficult for residents. Humanitarian aid was unable to get through and few trapped there were able to leave. Opposition forces managed to break the siege in early August but fighting has intensified since then.

5. The boy in the ambulance

Aleppo was most recently in the news when the image of an injured boy in an ambulance in the city went viral. Omran Daqneesh, “the boy in the ambulance” became a symbol of Aleppo’s devastation – and of international shame and failure.

But Omran is just one of an estimated 75,000 children are fighting to survive in eastern Aleppo; prevented from going to school or even hospital, as both are deemed too unsafe, these children live under constant fear of attack. The Syrian Observatory For Human Rights estimates that more than 14,000 children have died since the conflict began in 2010. 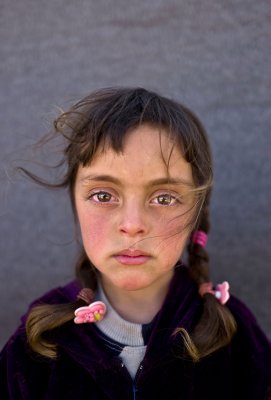 A Young Syrian Refugee Dreams of Going to School
Next Up: Editor's Pick