When Turkish tanks and warplanes crossed into Syria to help rebels retake the town of Jarabulus from ISIS on August 24, Syrian refugees at a camp just north of the border celebrated. A man named Abdel Wahab Shobak even shaved his beard, mirroring celebrations by other Syrian men freed from restrictive jihadi rule. Stranded in Turkey, Shobak hadn’t been living under ISIS, but he was still elated. “I was so happy at the liberation of these areas, and in hope of going back home soon,” he says. “The operation actually gave us some hope.”

Read More: Rescue at Sea: On Board a Refugee Recovery Ship

Now sporting a neat trimmed mustache, Shobak runs a small concrete shop across the road from the walled refugee camp. The camp lies in fields of pistachio trees outside the border town of Karkamis, on the border not far from the banks of the River Euphrates. He sells soda, ice cream, nuts, and cigarettes to a stream of refugees, many of whom buy on credit that Shobak records by hand in a ledger. Just a few miles away, Turkish tanks and armored vehicles massed on the side of the road into the town.

Shobak holds court as he works, talking about his family’s flight from the town of Kafr Naya, north of Aleppo. “Six people in my family have been killed. Three were my nephews and three were my brothers. And still I shaved my beard in celebration,” he says. “This is the first step toward victory.” A moment later, a young man strode into the shop and asked him, “Where’s your beard?”

The two-week-old Turkish military incursion unsettled the already chaotic battlefield in Syria, strengthening the hand of the Syrian opposition and angering the regime of President Bashar Assad and his key backer, Russia. The operation expelled Islamic State forces from the last stretch they controlled on the Syrian-Turkish border, depriving the jihadists of an important smuggling route to Turkey’s major cities and to Europe, potentially cutting off the path for new jihadis. The stakes of the offensive are high, as Turkey and its Syrian rebel allies now risk confrontation with rival Kurdish-led forces or the regime.

But the operation also provides a glimmer of hope to some of the nearly three million Syrian refugees who remain stranded in Turkey, among a total population of 4.8 million people scattered across the region and beyond. A few are already aspiring to return to their homes in what Turkish officials are calling a “de facto safe zone” in northern Syria. Even those whose homes are not directly affected expressed relief at seeing ISIS eliminated from the border area. The operation also emboldened some of the embattled forces of the Syrian opposition, who stand to take control of the newly-liberated areas.

The operation has unfolded with remarkable speed. It began on August 24 when rebels and Turkish forces rolled into the town of Jarabulus, just south of the border. On September 3, Turkey opened a second front in the town of al-Rai, West of Jarabulus, sweeping ISIS from its border in a pincer action. Rebel forces now say they are pressing south toward the key ISIS-held town of al-Bab, northeast of the major city of Aleppo. It is unclear how far Turkey’s forces will go into Syria, but regardless, opposition officials say they have a sense of momentum.

“The situation is very good. The Syrian opposition is advancing backed by Turkish forces,” says Zaki Amin, a local council official from the newly-freed town of Ghandoura, speaking by phone from Syria. “They’re advancing every minute, thank God, and hopefully in the coming days we’ll liberate al-Bab.”

The opposition-affiliated local councils are in the early stages of setting up governance and aid distribution in the newly-freed areas. Mohamed Haji Ibrahim, a lawyer and head of the Ghandoura local council, said he is preparing to return to the town after years in which his town suffocated under ISIS rule. “Ghandoura has been neglected for more than three years. The people of the world don’t know where Ghandoura is and what a strategic town it is,” he said in an interview in the city of Gaziantep in Turkey.

If Turkish forces proceed south, the risk of quagmire will likely increase. Standing in the rebels’ path is the ISIS-held town of al-Bab, with a pre-war reported population of more than 60,000. Taking the town would place Turkish forces in closer proximity to the forces of the regime and the Russian air force, as well as nearby pro-Kurdish forces who are allied with Kurdish separatists in Turkey. The military announced on September 6 that two Turkish soldiers had been killed in an ISIS attack.

“You need a coherent, clear timeline, and also a clear roadmap,” says Metin Gurcan, a former Turkish military officer and columnist for the news site Al Monitor. “The thing that I’m saying is, Ankara has no clear timeline and roadmap.”

The results on the battlefield will also depend partly on the outcome of negotiations among the world powers backing opposing sides in the conflict. U.S. secretary of State John Kerry is set to hold talks in Geneva with Russia’s foreign minister Sergei Lavrov in an effort to negotiate a ceasefire in Syria. A Russian and American-backed ceasefire declared in February collapsed within a few months as Russian-backed regime forces advanced. Those advances included imposing a siege on the key rebel stronghold in the city of Aleppo in June. Briefly interrupted by an Islamist-led counterattack in August, the siege of eastern Aleppo is now back in place, trapping an estimated 300,000 civilians in the rebel enclave.

Back in the Turkish city of Gaziantep, another refugee named Ahmed Dallal, 45, sits in his living room where he lives with his family of seven. He had lived in Aleppo before fleeing intense shelling by the regime in 2012. He returned with his family to his hometown of Jarabulus, on the Turkish border. They lived there happily until 2013, when ISIS began infiltrating the town, preparing the way for a takeover that would come later that year. In February of 2013, he denounced ISIS during a relative’s funeral and had to flee after a jihadi official threatened him. Following the Turkish incursion, Jarabulus now falls in the so-called “safe zone.” He says, “I support this action. It should have come sooner.” He has no plans to return for now, but that may change. “I will go back to Jarabulus if I feel it is safe.” 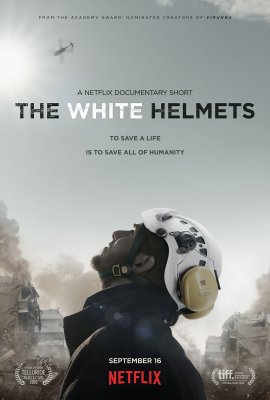 Exclusive: Watch the Trailer for 'The White Helmets'
Next Up: Editor's Pick