Native Americans march to a sacred burial ground that was disturbed by bulldozers building the Dakota Access Pipeline (DAPL), near the encampment where hundreds of people have gathered to join the Standing Rock Sioux Tribe's protest of the oil pipeline slated to cross the nearby Missouri River, September 4, 2016 near Cannon Ball, North Dakota. Protestors were attacked by dogs and sprayed with an eye and respiratory irritant yesterday when they arrived at the site to protest after learning of the bulldozing work.
ROBYN BECK—AFP/Getty Images
By Mahita Gajanan

A federal judge ordered a temporary stop on part of the construction of a $3.8 billion oil pipeline after intense protests by Native American tribal officials in North Dakota.

U.S. district court judge James Boasberg said Tuesday that work on the Dakota Access Pipeline must pause between North Dakota’s state highway 1806 and 20 miles east of Lake Oahe, but continue west of the highway, because the U.S. Army Corps of Engineers lacks jurisdiction on private land the Associated Press reported.

A protest of the pipeline building turned violent over the weekend when members of the Standing Rock Sioux tribe accused construction crews of destroying burial and cultural sites on private land near Lake Oahe. Four security guards and two guard dogs were injured in the protest. According to a tribe spokesman, about six people, including a child, were bitten by the dogs and 30 were pepper-sprayed.

The protest pushed the tribe to ask for a temporary stop to construction, the AP reported.

Boasberg said he will rule by the end of Friday on the Standing Rock Sioux tribe’s challenge of federal regulators’ decision to grant permits to the Texas-based operators of the pipeline. The pipeline will cross four states, including North Dakota, South Dakota, Iowa and Illinois. 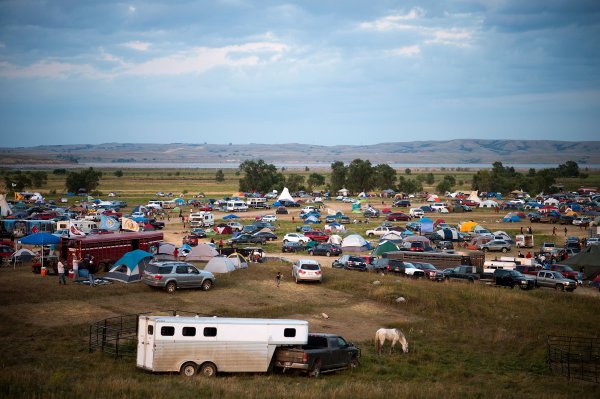