Tig Notaro in One Mississippi.
Amazon Studios
By Daniel D'Addario

On Friday, Amazon debuts One Mississippi, a six-episode series based on the real-life trials of comedian Tig Notaro, who dealt with a life-threatening infection, the death of her mother and breast cancer in short order. If that sounds unfunny, you don’t know Notaro, who’s become famous for wringing laughs out of her ordeal, particularly in a notorious live comedy set in which Notaro introduced untold new audiences to her understatedly witty, deadpan style.

She’s now one of a new wave of creative forces who are bringing specific, and deeply un-formulaic, perspectives to TV comedy. On FX, both Pamela Adlon and Donald Glover have shows largely rooted in subjectivity, while Issa Rae is telling a story similar to ones she spun on YouTube with the help of an HBO-sized budget. All of these shows resist easy, broadly accessible laughs by making you first do the work of figuring out who the characters are. Networks and streaming services no longer bound to drawing mass audiences can afford to potentially alienate some; any show that sets out to flesh out a truly interesting world will inevitably do so.

One Mississippi places Notaro’s autobiographical character in sharp relief against characters who deal with grief in loopier manners than she ever would. Notaro, visiting the old Southern homestead from her Los Angeles home base, is simultaneously mourning her mother, working to maintain her health and managing her relationship with a stepfather (John Rothman) whose sadness takes the form of a deepening obsessiveness. Both he and her brother (Noah Harpster) trend more philosophical than the brusque Notaro. “I’m not trying to understand death,” she says at one point. “I’m trying to understand her death.” She’s focused on getting through the particulars, processing and moving on, even as unwanted flashbacks of her mother (Rya Kihlstedt) indicate that moving on won’t be that easy.

Notaro’s initial rise was perhaps surprising for quite how far a single comedy set took her, but the medium was at least equipped to handle her unusual affect. Live comedy requires no more investment than the comic’s own time and can bend to suit unusual personae. A TV comedy feels less hospitable to someone with a genuinely odd sense of humor and a muted manner of expressing it. That Notaro was given a budget sufficient to produce a legitimately risky series feels like the best-case outcome of the current fractured TV landscape. Yes, the fact that FX star Louis C.K. was on board as a producer surely helped, but Notaro is a talent all her own—and C.K.’s own stardom is itself the result of outlets being more willing to pursue stars with unconventional energy.

But One Mississippi is yet harder to square with TV conventions than even Louie was; its resistance to sentiment of the traditional sort means that its moments of genuine emotion sprout up oddly and at askew angles. Notaro’s character plays a radio storyteller, and her tales wend oddly, taking precious time to get to their destination; the space they take up is all the more pronounced by the show’s abbreviated six-episode run. The series resists TV-ness even in its format, cutting the story short once it’s said exactly as much as Notaro is willing to say.

It’s heartening that there’s finally an outlet comfortable enough with risk (and with the likely small but devoted audience that artistic risk engenders) that a low-fi, shaggy show about a darkly humorous lesbian dealing with grief and with her recent double mastectomy. It’s not alone in its specificity: Adlon’s Better Things, also produced by C.K., plunges viewers into the home and professional life of a lower-tier Hollywood actress trying to raise three daughters, while Glover’s Atlanta assays the life of a would-be rap manager struggling to break through. (Both shows began this week, and both are among the fall’s very best shows.) And HBO’s Insecure, launching Oct. 9, is, from its first moments, deeply specific both to its South Los Angeles milieu and to the “Awkward Black Girl” comic persona of writer/star Issa Rae.

All three performers, and characters, are funny to their bones, but all three have a certain alienation effect, due to their un-sitcommy prickliness as well as the very specific nature of their lives. Adlon’s harried mom ignores her child’s tears in a shopping center and tells off those who stare; Glover’s perpetual aspirant is locked in quiet war with his credit-card company coworker; Rae raps at herself in the mirror to psych herself up and, given the opportunity to take the stage at an open-mic night, decides the best move is to perform a derisive song about her best friend’s genitals. These characters don’t live in sitcom-ready Anytowns—they live where they live, in settings rendered with precise detail. The humor comes from the way they play off those details.

That cable and streaming series can go deeper, darker, and weirder than broadcast shows in pursuit of laughs and insight is hardly news. But the tight focus on the genius of the individual creator—in Notaro’s, Adlon’s, Glover’s and Rae’s case someone who both looks and thinks differently than a straight white male comedy writer coming out of traditional circles—is a wave that feels somewhat more novel. TV’s auteurist phase in drama gave us showrunners like David Chase, Matthew Weiner, and Vince Gilligan, individuals with a genius for telling a particular sort of story about troubled men brilliant at their jobs. Perhaps the auteur period of TV comedy (one that had already included Louie and Girls) is only now really gaining steam—and includes creative people who are not just willing to draw from real-life detail but willing to put themselves in the frame. 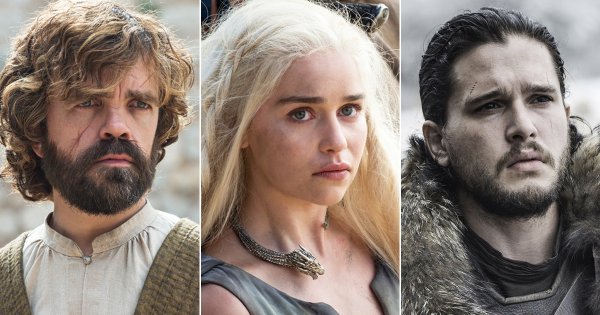 Everything You Need to Know About Game of Thrones
Next Up: Editor's Pick