I Should Be Able to Play Basketball in a Hijab

A defining moment of the Rio Olympics occurred within moments of the American delegation entering Maracana Stadium. The procession was led by swimming legend Michael Phelps as flag-bearer who, after a few strides, gestured for teammates to join him. On that front line stood my friend Ibtihaj Muhammad, a Black Muslim American athlete, who in that beautiful moment symbolized diversity, acceptance and inclusion.

All I could do was gratefully live vicariously through Ibtihaj, because at that moment, I realized it may be the closest I get to reaching the Olympics myself.

I’ve spent my life, since the age of four, in love with the game of basketball. I am considered the first hijab-wearing basketball player in the NCAA and I hold the Massachusetts high school scoring record for basketball. But after graduating from college, my dream to play professionally hit a serious roadblock: I’ve been sidelined by the Federation Internationale de Basketball (FIBA) ban on hijab—a head covering worn by observant Muslim women.

FIBA is the international governing body of basketball currently upholding Article 4.4.2 which bans headgear—including turbans, hijabs, and yarmulkes—due to perceived injury risk. This means that players who wear such headgear, even for religious reasons, are ineligible to play in any FIBA competition, including the Olympics. Yet I’ve played a combined total of 300 high school and college games and my hijab never harmed myself or any of my opponents.

In 2014, led by Bosnian-American Indira Kaljo and including American Congress members and civil rights groups, we petitioned FIBA to end the ban. The organization answered with a two-year provisional ruling allowing athletes to wear headgear while a final ruling was considered. However, the provisional measure only applies to national-level competitions, and requires countries to submit a written petition to FIBA asking permission for a player to compete in headgear.

It has been a long wait, but the two years are up this September—and a decision will be made soon. This time, there are 15 of us who have secured over 130,000 signatures directed at FIBA’s president to swiftly end the ban.

After all, other sports have overturned their own bans on headgear. The volleyball community has allowed Muslim women to play in full hijab—with head, arms and legs covered. And with football, FIFA overturned its hijab ban in 2014 after receiving evidence compiled by medical experts that disproved any injury risk.

If FIBA truly wants to bring people together with basketball, as stated in its mission statement, it’s time for the group to drop penalties that deny equal access. Do not force some of us to choose between our faith and sport.

At times, I have wanted to quit, but I realized that this fight isn’t just about me anymore. There are so many hijabi basketball players out in this world who share the same aspirations I do.

Whether my dream to play professionally remains on hold or I have to give it up completely, I’m raising my voice for all the Muslim girls who I currently coach and for those in future generations who will fall in love with the game as I did. For as incredible as it was for me to revel in the vicarious joy of Ibtihaj’s athletic triumphs and medal, I will as acutely feel the pain of Muslim girls who have to abandon their dreams–or not pursue them at all because of unjust and discriminatory obstacles.

Bilqis Abdul-Qaadir is a Muslim American basketball player and athletic director. The Life Without Basketball documentary film about Bilqis will be released in 2017. She is an Athlete Ambassador for Shirzanan, a Muslim women and sports advocacy group. 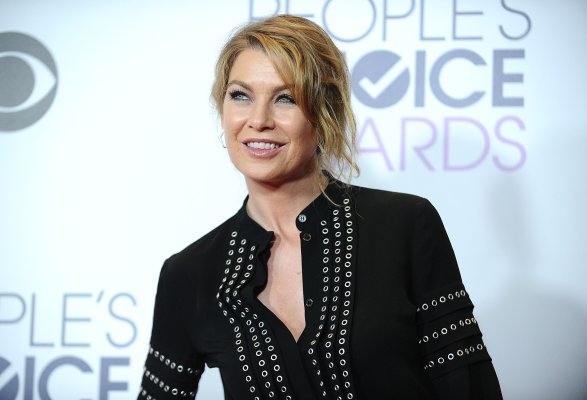 Ellen Pompeo Wants Her Daughters to Know That Women 'Get Better With Age'
Next Up: Editor's Pick