Fantasy Football Season Is Starting. Here's How the Phenomenon Began

Al Davis, head coach of the American Football League’s Oakland Raiders, is shown as he talked, Dec. 18, 1963 in Oakland with his players at the team’s home practice field.
Robert Klein—AP
By Ashley Ross

As the 2016 NFL season begins, what it means to be a football fan is changing. Many of the sport’s devotees no longer root for one specific team. Instead, there are certain players in every game, on every down who could make or break their Fantasy Football team. More than 57 million people played fantasy sports in 2015, with football ranked as the top choice among all fantasy sports. But while it’s become typical of America’s sports infrastructure—Barack Obama, Daniel Radcliffe and Elizabeth Banks all play—many fantasy team “owners” don’t know how the whole thing started.

Fantasy baseball had long been a hobby of Wink’s when Tribune sports editor George Ross suggested trying the same method with football. When Wink brought the idea to Tunnell and Stirling, who were immediately on board and helped create the rules. Andy Mousalimas, a bar owner who went on to create the more modern-day traditions fantasy players are familiar with now, was an original GOPPPL member and told ESPN in 2012 that the first fantasy league had everything to do with the Raiders.

“To be eligible for the league, you had to be either affiliated with the Raiders or have purchased or sold a certain number of season tickets,” he said. His bar had a stake in tickets, so he got the call from Stirling and accepted the invite. Drafts were done old-school style, and there were no apps to help track player performances. Wink’s son once said he remembered his father not only watching one game, but also setting up radios around the TV so he could listen to other games.

In 1968, Mouslaimas opened a new bar in Oakland and started a public league the next year, altering the rules to make them more intricate, in order to account for a great number of dimensions of the game. Mousalimas attracted so many people that, by 1974, there were around 200 players involved. By 1980, an all-female division existed. “The ladies turned out to be the most loyal of the whole group,” Mousalimas told ESPN.

The game’s popularity continued to spread, mostly through word of mouth and especially through various sports reporters.

By the ‘90s, weekly magazines dedicated to fantasy rankings were dispersed, the Fantasy Sports Trade Association (FSTA) was founded and millions were getting in on the fantasy model. Wink died in 1993 at the age of 81, just six years before Yahoo! offered its fantasy product for free. Since then, the number of fantasy football players has steadily grown year over year.

And fantasy football is very real business. The average fantasy sports player is quite affluent, making a household income of more than $75,000, according to the FSTA, and spends upwards of $500 a season on “league-related costs.” Perhaps the most recent evidence of Fantasy Football’s legacy was its recent insider-trading scandal, which required a new form of defense for those embroiled in the drama.

The fun side of Fantasy remains, though, with players’ clever team names and Fantasy-themed pop culture like the FX and FXX comedy The League. A 2009 Associated Press article even highlighted various NFL players who join Fantasy leagues themselves, and players have acknowledged that Fantasy helps bond players to fans.

This Thursday, millions of fans will gear up to see how their teams do when the Carolina Panthers and Denver Broncos kick off the season at 8:30pm EST on NBC. 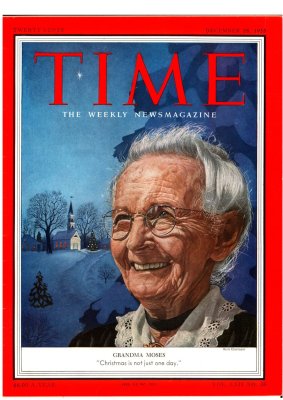 Grandma Moses Didn't Start Painting Until Her 70s. Here's Why
Next Up: Editor's Pick