If you only read one thing: Welcome back from the holiday weekend where we’re down to 63 days until Election Day and under three weeks until the first debate. Labor Day marks the historic starting gun for the sprint to voting, which begins in just 17 days in some states, so buckle up.

While most Americans were enjoying a last beach foray or barbecue, Hillary Clinton and Donald Trump spent Monday barnstorming swing states and delivering speeches highlighting American workers in Ohio. The pair also spent time talking to their press corps—which is notable only for how infrequently it occurs. For Clinton, her gaggle aboard her new campaign-branded Boeing 737 was the closest she has come to a press conference in more than 270 days. For Trump, who invited a small contingent of reports on his plane for a brief flight, it was his most unfiltered comments since a campaign shake-up and his confounding attempt at “softening” his position on illegal immigration. Here’s what we learned:

All told, the day was almost like a day on a “normal” campaign, with accessible candidates and logical schedules. But this is not a normal campaign, so it probably won’t last too long.

Trump makes a new pitch to African American voters. Clinton’s month of fundraising. Obama And what we learned from the FBI’s notes on the Clinton email investigation.

Where Has Hillary Clinton Been? Ask the Ultrarich
For much of August, she was raking in the dollars [New York Times]

“So we see Obama go over to China and they don’t give him stairs proper stairs to get out. They have pictures other leaders going there coming down with beautiful red carpet, and Obama’s coming down a metal staircase, probably was built in China, it wasn’t built here. A metal staircase in the back of the plane, I have to tell if you that you were me, I’d say you know what folks I respect you a lot but let’s get out of here.” — Donald Trump at a roundtable in Ohio Monday. (In fact, Obama exited using the American-made built-in stairs on Air Force One, following a protocol dispute with Chinese officials.)

“Every time I think about Trump, I get allergic.” — Hillary Clinton after coughing during a campaign speech 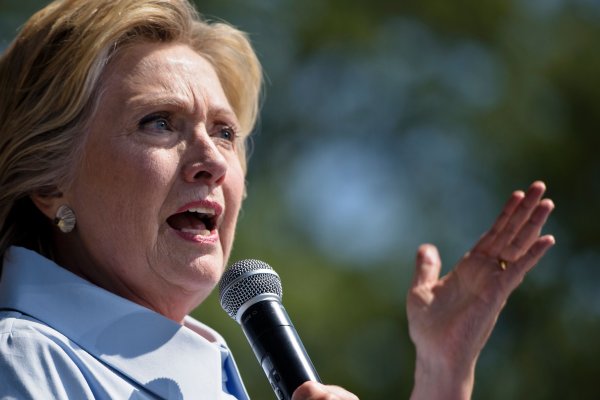 Hillary Clinton: Donald Trump 'Did Choke' in Meeting with Mexican President
Next Up: Editor's Pick