Bangladeshi security personnel stand guard in front of Kashimpur Central Jail where Mir Quasem Ali, a senior leader of the main Islamist party Jamaat-e-Islami, was being held before his execution, in Gazipur, on the outskirts of Dhaka, Bangladesh, Saturday, Sept. 3, 2016.
AP
By TIME Staff

Rights groups have raised concerns over the execution Saturday of Mir Quasem Ali, a prominent member and financier of Bangladesh’s Jamaat-e-Islami party.

Ali was executed for war crimes committed during the country’s 1971 Liberation war against Pakistan, after being convicted in 2014.

“There are concerns over systemic flaws [in trials of Ali and other opposition leaders],” Meenakshi Ganguly, South Asia Director, for Human Rights Watch, told TIME.

The trials, she said, were “crucial to ensure accountability for the serious abuses that occurred ahead of Bangladesh’s independence and needed to be up to international standards.”

Last March, Human Rights Watch described the verdict against Ali as “based on a flawed trial” with “grave doubts” about the evidence presented by the prosecution. Critics have labeled the ongoing tribunal as politically motivated and a means for Bangladesh’s ruling party, the Awami League, to consolidate power by eliminating opposition party leaders.

The Guardian reports that thousands of extra police officers and border guards have been deployed in Dhaka after the hanging in case of a violent backlash after Ali’s death. The execution took place after a series of terrorist attacks and military crackdown on extremism that has led to secret detentions and at least 11,000 arbitrary arrests by security forces since June.

“What is particularly concerning is that his [Quasem Ali’s] son was detained and is yet to be charged or released. He remains effectively disappeared,” says Ganguly. “Bangladesh insists it is committed to protecting human rights and yet has been unable to address the alarming practice of torture, enforced disappearances and extrajudicial killings.” 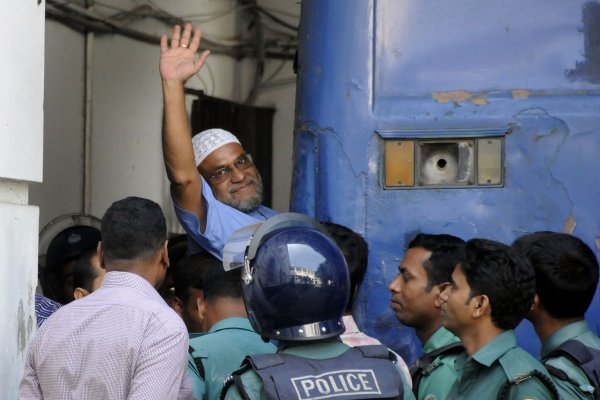 Bangladesh to Execute Islamist Leader for Alleged War Crimes
Next Up: Editor's Pick