Eleanor Roosevelt on Labor Day: 'One of the Most Significant Days'

Labor Day is the traditional start of the political campaign season. Yes, the presidential campaign has been going on for over a year, but now summer is over, school has started, and citizens are going to pay attention—they will soon be voting. This day is an especially important marker for workers in campaign 2016.

Labor Day was first celebrated on September 5, 1882 in New York City. Local unions joined together in a Central Labor Union. Led by machinists and carpenters they proposed a “monster labor festival” for workers and their families to show the “the strength and esprit de corps of the trade and labor organizations.” Over 10,000 workers took unpaid leave to march up Broadway behind the Jewelers Union band, concluding with a party at Wendel’s Elm Park on 92nd Street and 9th Avenue. States soon passed legislation for days of celebration and in 1894 the first Monday in September became a national holiday to honor workers and their unions with parades, speeches, picnics, fireworks, and a day off of work.

Politics were added in the 1930s. Initially neutral, unions became major players in our presidential campaigns in 1936, when John L. Lewis, president of the mighty United Mine Workers Union, led the effort to create Labor’s Non-Partisan League and contribute half a million dollars, an enormous sum at the time, to Franklin D. Roosevelt’s reelection campaign. Later in New York the garment unions led efforts to form the American Labor Party, the Liberal Party, and the first National Citizens Political Action Committee with the specific goal of supporting labor’s agenda and New Deal Democratic candidates. The surge in union membership was linked to FDR’s policies and labor support was critical to his reelection. Labor Day speeches became a common call for labor’s vote.

Both policies and politics were closely connected through First Lady Eleanor Roosevelt, who joined the American Newspaper Guild, CIO, in 1936 and was a member for the next 25 years. Her union card was in her wallet when she died. In 1940, as FDR sought an unprecedented third term, she wrote in her syndicated My Day column that “To me and to every citizen of the United States, Labor Day must be one of the most significant days on our calendar. On this day we should think with pride of the growing place which the worker is taking in this country…. This is as it should be in a democracy and it is the surest way of proving that we intend to preserve democracy.” Eleanor Roosevelt had come to believe that unions were an essential element of democracy. Workers voted overwhelmingly for Roosevelt in 1940.

That same year, she was asked, “Can a woman be President of the United States?” Her unequivocal answer to the readers of Good Housekeeping Magazine was “No. It will be a long time before a woman will have any chance of nomination or election… there may be a day when women will be looked upon as persons. We are, however, far from that day as yet.”

Far indeed, as seventy-six years later here we are at Labor Day with Hillary Clinton’s historic nomination as the first woman candidate of a major party for president. The possibility of the first woman president comes at a critical time for women and for labor. Good jobs, income inequality, and declining union membership are concerns for union workers, while issues such as equal pay, paid family leave, and child care continue to especially resonate with women workers.

While union membership is at its lowest point since the 1920s, just seven percent of workers in the private sector belong to a union, they remain an important political force. Historically, white working-class men have been the mainstay of the labor movement, but according to the New York Times many are planning to vote for Donald Trump. Historian Timothy Minchin argued, however, that in 2008 union support led by the AFL-CIO was critical to Barack Obama winning the majority of unionized white men, while non-union men voted overwhelmingly for John McCain. Hillary Clinton has received the endorsement of the AFL-CIO, representing over 12 million workers in 56 unions. Almost half of these union members are now women and like the men they receive higher wages and better benefits than their non-union sisters.

Hillary Clinton tells workers “I’ve always believed that when unions are strong, families are strong and America is strong. That is not a slogan for me. That is a statement of fact.” Her platform includes: investing in good-paying jobs, restoring collective bargaining rights, defending against partisan attacks on workers’ rights, equal pay for women, guaranteed paid family leave, and affordable child care.

AFL-CIO President Richard Trumka said in announcing the federation’s endorsement “Hillary Clinton is a proven leader who shares our values… she has demonstrated a strong commitment to the issues that matter to working people, and our members have taken notice.” Liz Shuler, secretary-treasurer of the AFL-CIO, declared that “Hillary Clinton has stood side-by-side with working women her entire life.” Shuler, the first woman and youngest person ever elected to her leadership position, affirmed that “We have the power to speak out for good wages, great benefits, fair scheduling and equal pay for equal work. We can win paid sick leave, paid family leave and quality child care. And yes, we can finally put a woman in the White House.”

Labor Day offers the opportunity to bring America’s diverse workers together in the final push to Election Day. Labor can advocate for all workers and women’s equality together. In Eleanor Roosevelt’s words “On Labor Day we must remember that this nation is founded to do away with classes and special privilege; that employer and worker have the same interest, which is to see that everyone in this nation has a life worth living.” And women are finally “looked upon as persons.”

Brigid O’Farrell is an independent scholar affiliated with the Eleanor Roosevelt Papers, a sponsored project of the George Washington University, and the author of She Was One of Us: Eleanor Roosevelt and the American Worker. 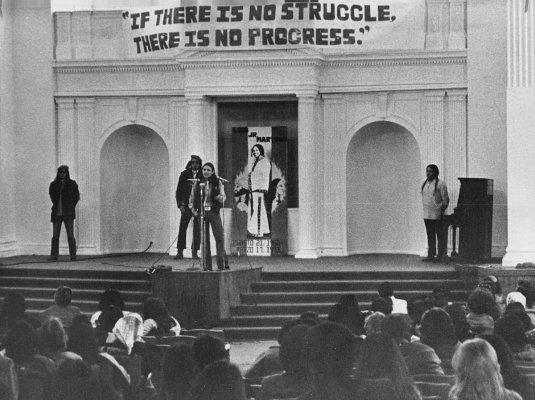