Vladimir Putin has claimed that he “[doesn’t] know anything” about the thousands of Democratic National Committee emails and documents that were procured by an unknown hacker and then posted by Wikileaks earlier this year.

But the Russian President added, in an interview with Bloomberg two days before a G20 meeting in China with President Obama and other world leaders, that he felt it was important for the content to have been given to the public.

“There’s no need to distract the public’s attention from the essence of the problem by raising some minor issues connected with the search for who did it,” he said, adding, “But… I don’t know anything about it, and on a state level Russia has never done this.”

Officials have blamed hackers guided by the Russian government for the cyber attack on DNC severs just before Hillary Clinton’s nominating convention in July. The emails showed that top officials mocked Vermont Sen. Bernie Sanders during the primary race and, in at least one exchange, considered using Sanders’ religious beliefs as a way to hurt his campaign. DNC chair Debbie Wasserman Schultz resigned from her post in the aftermath of the hack.

At a press conference in Florida in July, Donald Trump appeared to encourage Russia to commit a cybercrime against Hillary Clinton, saying he hoped Russian hackers could recover some of her deleted emails.

“Russia, if you’re listening, I hope you’re able to find the 30,000 emails that are missing,” he said. “I think you will probably be rewarded mightily by our press. Let’s see if that happens.” 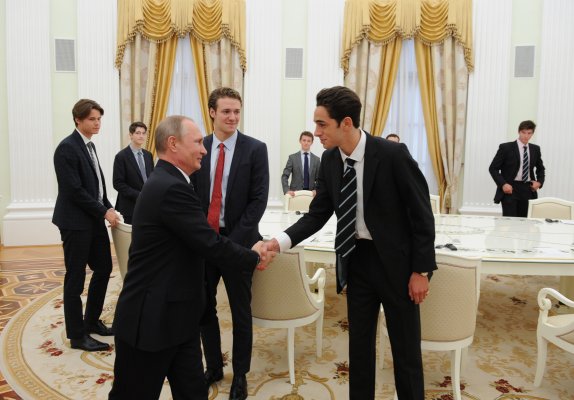 Group of British Teenagers Met Privately With Putin
Next Up: Editor's Pick