Tom Ford, a filmmaker who first made his name as a fashion designer, hasn’t come out with a film since the 2009 A Single Man. When you see his new one, Nocturnal Animals, premiering here at the Venice Film Festival, you may understand why. Ford is still, if nothing else, a meticulous arranger of images. As with A Single Man, early every frame of Nocturnal Animals has the microcalibrated look of a fashion shoot that took weeks to plan: A drab curtain brushes a grimy windowsill just so, while an active fly or two buzzes in the foreground. A pair of corpses lie artfully entwined on a blood-red couch that’s been dumped as trash (though it’s still a really nice couch), a fantasy death tableau. A sequence showing a distraught Jake Gyllenhaal trying to unwind in a Texas motel bathtub dissolves elegantly into one of a depressed Amy Adams lounging in a much fancier Los Angeles one.

As shot by the gifted cinematographer Seamus McGarvey, Nocturnal Animals is beautiful—or at least arresting—every minute, and it sure isn’t boring. But it’s unclear exactly what Ford is trying to say, though it’s clear he’s trying hard to say something. And that’s the most frustrating thing about this picture: There seems to be some nuance here—something that is possibly very meaningful to Ford—that just can’t break through the movie’s glassy surface.

Amy Adams—also appearing in another festival film, Denis Villeneuve’s Arrival—plays Susan, a sleek and seemingly successful Los Angeles gallery owner who wears lots of chic dark clothes and way too much sooty eye makeup for a fair-skinned redhead. This is our first clue that she’s a woman who has made all the wrong choices: Her hyper-handsome husband (played by hyper-handsome Armie Hammer) has made some bad business deals and lost much of the couple’s money. It’s revealed that Susan hates what she does for a living. (The movie’s opening credits feature what we learn later is part of her gallery’s most recent installation, a video series featuring a group of garishly made up, overweight women who are mostly naked except for a few over-the-top red, white and blue majorette accessories. They’re shot so that every lump, bump and jiggle is exaggerated. This is the initial “Just what are you trying to say, Tom Ford?” prompt, the first of many.) And suddenly, a box has landed on Susan’s kitchen counter: It contains a novel written by the ex-husband she hasn’t spoken to in nearly 20 years. She sits down to read it, and it shakes her to the core.

That part is easy to understand: The novel, dramatized as a mini movie within the bigger one, tells the story of a Texas man, Tony (Gyllenhaal), who sets out on a road trip to Marfa with his wife and teenage daughter, both of whom look markedly like Susan. (They’re played by Isla Fisher and Ellie Bamber, respectively.) Tony’s plan is to drive all night, but on the deserted highway, he ends up in a terrible, and ultimately tragic, game of cat-and-mouse with a bunch of rednecks. This sequence is the best in the film, tense and beautifully sustained, a suggestion that Ford knows how to shoot action even though he generally favors gorgeously arranged inaction.

Tony is clearly a stand-in for Susan’s ex, Edward, and the novel is his cry of anguish over the death of their relationship. He wants Susan to understand the pain she’s caused him, and she gets the message. Nocturnal Animals is a movie about regret, among many other things: Susan reflects on the poor choices she’s made, decisions that have led to true unhappiness. Edward is using his fictional counterpart, Tony, as an expression of anguished, human helplessness (and its subset, anguished male helplessness). Adams and Gyllenhaal do some real acting here: Their characters’ pain feels genuine, even in the midst of all the careful art direction.

If Nocturnal Animals succeeds as anything, it works as a glossy, stylish noir, with elements of vigilante revenge (as well as elements of Michael Shannon, who shows up as an inscrutable, drawling Texas lawman). But there are too many times when Ford’s vision leans dangerously close to self-parody. At the gallery, Susan has a conversation with one of her underlings, Jena Malone, who, being an art-gallery person, has slicked-back hair and is wearing a total-fashion-victim white blouse and leather harness getup. She shows Susan how she watches her newborn all day long via a cellphone app—she’s more entranced with the app than with the baby.

This character is obviously a cartoon, a satirical jab at the way we live now, at least when we live with money. But Ford also makes many of these fancy trappings—Susan’s gorgeously tailored coat and luxe boots, her big, fashionably minimalist glass-box house, or the curvaceous John Currin nude that hangs above her desk—look really nice, like things a person ostensibly might want to own. Does Ford hate these things or love them? How does he want us to feel about them? The signals they send in the context of the story are unclear, no matter how lovingly they’re filmed. In the end, Nocturnal Animals barely feels like a film made by a human being. You could just dub it a “stylish exercise” and call it a day. But I just can’t shake the fact that Ford somehow wants it to be more. The movie feels glazed and remote, a surface with all the identifying fingerprints polished off. What would it look like if Ford had left them on? 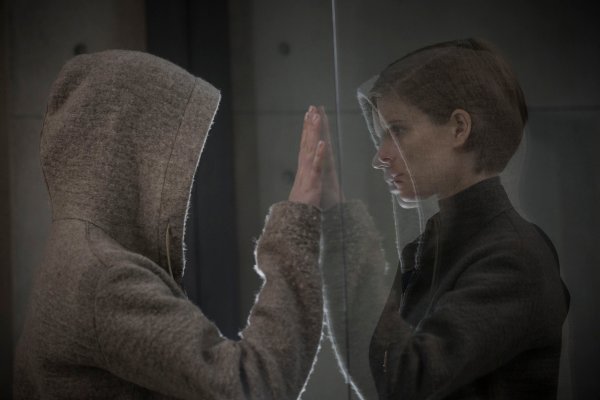 Review: An AI Experiment Goes Haywire in Morgan
Next Up: Editor's Pick