Four days ahead of what would have been Freddie Mercury’s 70th birthday, the Queen singer’s first home in England was given an honorary blue plaque to indicate he once lived there. The Thursday ceremony in London featured Queen guitarist Brian May and Mercury’s sister, Kashmira Cooke, unveiling the plaque.

“Mum and I are so proud and pleased that English Heritage is honouring our Freddie with a Blue Plaque, and that he will be amongst other famous names forever,” Cooke said. “Secretly he would have been very proud and pleased too.”

The plaques have been around since 1866 and are handled by charity English Heritage. Over 900 plaques are spread across London buildings, recognizing homes for historical and cultural luminaries such as Sir Winston Churchill, Charles Dickens, and John Lennon. To be eligible for a plaque, a person must have been dead at least 20 years. Mercury died of complication from AIDS in 1991.

Mercury’s parents purchased the Feltham, London home in 1964 so the family could flee from its conflicted home of Zanzibar (now Tanzania). Mercury met May and fellow future Queen bandmate Roger Taylor while living there. They formed Queen in 1970.

“It is a pleasant duty to help install this little reminder on Freddie’s parents’ house in Feltham,” May said, per English Heritage. “It was here that I first visited Freddie soon after we had met through a mutual friend. We spent most of the day appreciating and analysing in intimate detail the way that Jimi Hendrix had put his recordings together in the studio — listening to Hendrix on vinyl played on Freddie’s Dansette record player — which had stereo speakers on opposite sides of the box!”

See the complicated crafting of Mercury’s handmade plaque in the video below. 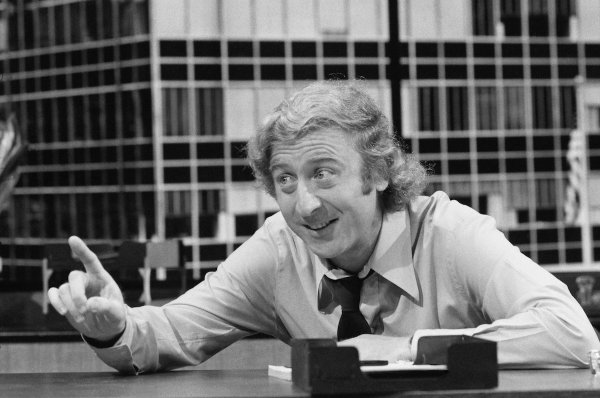 How Gene Wilder Channeled His 'Hysteria' Into Success
Next Up: Editor's Pick