We Should Treat Early Childhood Educators as Valued Employees

Ideas
By Jessica Sager
Jessica Sager is the founder and executive director of All Our Kin and a lecturer at Yale College. She is a Pahara Aspen Fellow and a Ms. Foundation Public Voices Fellow through The OpEd Project.

Labor Day is not only a day off work for many Americans to acknowledge the contributions of millions of workers; it is also a day off from childcare for millions of American children and the educators who work to care for them.

Although the earliest years are the time of greatest brain development, we have structured childcare as the responsibility—and burden—of individual families. Unlike our system of K-12 education, we don’t include early childhood education as part of our public investment framework.

That neglect is in spite of the acknowledgment from many arenas of the importance of early childhood education.

Police chiefs across the country have called for investment in early childhood education as a way to reduce crime, citing research demonstrating that children who have high-quality early learning experiences are five times less likely to engage in criminal behavior as adults.

Mission Readiness, a consortium of retired military leaders, purports that early childhood education is essential to our national defense, by helping to a create a pool of better-prepared and qualified military recruits.

Business leaders such as John Pepper, the former CEO of Proctor & Gamble, and Ben Bernanke, former Chairman of the Federal Reserve, have identified early childhood education as critical to developing the workforce of tomorrow.

To complicate matters, we call them “babysitters,” not educators. We ignore the training, care and attention that they bring to their work with children. As a result, the choice to engage in this profession can seem ill-advised.

In the absence of a universal childcare system, this cycle is created by our assumption that childcare is a private good, and that families should shoulder the burden of care without public support.

Yes, early childhood education is expensive; center-based childcare for an infant or toddler is more expensive than college tuition in most states.

We have a model for investing in early childhood education as a public good: the United States Military. Our nation’s defenders have created a system for investing in childcare that is affordable, high-quality and accessible for military families.

They provide quality training and oversight for childcare programs serving military families, subsidize up to 50% of the cost of care, and ensure adequate wages—$15 an hour, on average—for childcare workers. Major Latosha Floyd writes: ““The U.S. military has come to realize that providing reliable, high-quality child care for service members’ children is a key component of combat readiness.”

It’s time to create a system of national investment comparable to what the military has. By Labor Day 2017, we can hope to have a plan in place for an early childhood education system that isn’t built on the backs of its workers. And one that does not forfeit the future for the children they teach. 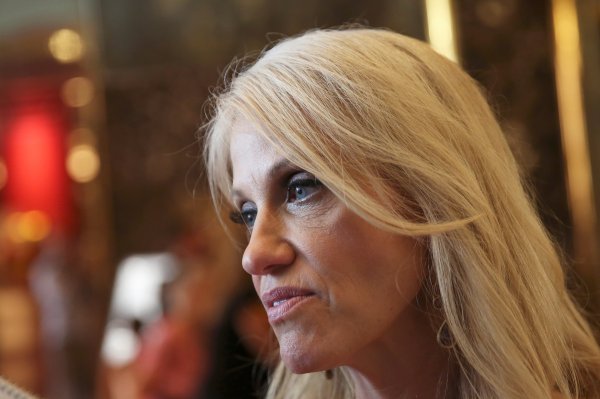 Kellyanne Conway Said Rape Would Not Happen If Women Were Stronger
Next Up: Editor's Pick