A man who suffers from autoimmune diseases and allergies holds an EpiPen during a protest against the increase in the price of the drug on August 30, 2016 in New York City.
Drew Angerer—Getty Images
Ideas
By Scott J. Knoer

Knoer is the Chief Pharmacy Officer at the Cleveland Clinic.

First, it was Valeant Pharmaceuticals and its 300% and 700% price hikes on two crucial heart medications. Then, it was Turing Pharmaceuticals and its 5,455% price increase on a lifesaving anti-parasitic medicine. And now, it’s Mylan and its 548% boost in the prices of EpiPens, meaning people with severe allergies may not be able to afford the tools that keep them alive.

It’s become a familiar dance: A drug company buys a well-established medication developed by another company. It raises the price by an obscene amount. The public reacts with outrage. Congress proclaims the need for inquiries.

In a few months, we’re likely to go through all of this again, with another company and another drug—unless Congress tackles the issue with legislation, not just rhetoric.

Mylan, Turing and Valeant may be the most egregious examples, but they’re not the only ones. Trends in the pharmaceutical industry show steady, steep price increases. A recent survey of 3,000 prescription medications found that prices more than doubled for 60 drugs and at least quadrupled for 20 drugs—and that was just since December 2014. On average, the cost of drugs is increasing at 10% a year.

While 10% may not seem so bad by comparison, consider that the current rate of inflation is only %1. Unrelenting increases are driving up the cost of hospital stays, insurance premiums, out-of-pocket expenses and health-care costs overall.

Hospitals like Cleveland Clinic, where I work, have no choice but to pay these overinflated prices. To withhold Turing’s Daraprim from an HIV patient—or Valeant’s Isuprel from a heart patient—because of the drug’s price tag would be unethical. To forgo the use of a life-saving drug because it costs too much creates ethical challenges. Like all hospitals, we are feeling the pinch. In 2015, we saw an unexpected increase in drug costs of $42 million.

But the impact to society is not limited to hospitals and patients. Everyone feels it, including insurance companies, employers, employees, the government and taxpayers—in other words, all of us. Even those who are healthy and medication-free pay more when drug prices outpace inflation.

Fortunately, the topic has received attention from the presidential candidates. This is an issue that must be dealt with regardless of who wins the White House. Here are some suggestions on how to fix the problem:

Ban direct-to-consumer advertising. Why do drug companies spend so much more on marketing than they do on research and development? Because advertising works. The American Medical Association and the American Society of Health-System Pharmacists have endorsed banning direct-to-consumer advertising because it leads to the over-prescribing of expensive drugs when more cost-effective options often exist. (Only two countries allow direct-to-consumer advertising—the U.S. and New Zealand, whose residents happen to take significantly more prescription drugs than those in comparable countries.) Drug companies spent $5.4 billion on direct-to-consumer ads in 2015, an increase of 19 percent over 2014. In fact, five of the ten fastest-growing ad spenders in 2015 were pharma companies, according to Ad Age. Valeant spent $441 million on advertising in 2015 on drugs like Jublia, a $500-per-bottle drug for toenail fungus that has a total course-of-treatment cost of $20,000. Direct-to-consumer drug advertising is not a constitutional right. We haven’t always had drug ads. FDA relaxed the rules in 1999 creating the deluge of ads we see today. These regulations should be rescinded in light of the negative cost impact to society.

Eliminate “pay-to-delay” payments. When a brand-name drug’s patent is about to expire, competing manufacturers begin to consider making a generic alternative, which will cost less than the brand-name drug and cut into its profits. To stop that from happening, the manufacturers of brand-name drugs will pay the generic manufacturers to not produce a generic version. It should not be legal to crush competition and manipulate the market in this way.

Pass the Creating And Restoring Equal Access To Equivalent Samples Act Act of 2016. Competition in the marketplace is a critical part of managing drug prices. However, competition has been stifled by the holders of certain patent-protected drugs. The CREATES Act requires manufacturers of brand-name drugs to provide the required samples of their products to generic manufacturers, allowing them to conduct studies demonstrating the equivalence of the generic version. This would allow generic versions of these drugs to get to market faster after the patent protection ends, creating a competitive market.

Allow some drug imports when companies egregiously raise prices. This is another means of creating competition—and it can still require the FDA to allow drug importation to hospitals through existing supply chains, as long as FDA’s quality standards are met.

Eliminate patient assistance co-pay cards. Pharmaceutical companies offer these cards to patients to help reduce their out-of-pocket expenses. While this may sound like a good thing, the real purpose is to direct patients to higher-cost branded drugs as opposed to using much cheaper alternatives. Eliminating a co-pay saves patients’ money but shifts the payment burden to insurance companies, which is eventually passed on to consumers.

After being grilled and shamed at congressional hearings, Valeant responded to its 718% increase and promised customers like us a 30% discount. To date, it never happened. And even if it does, a 30% discount after a 700% price increase doesn’t seem like an even trade-off to me. 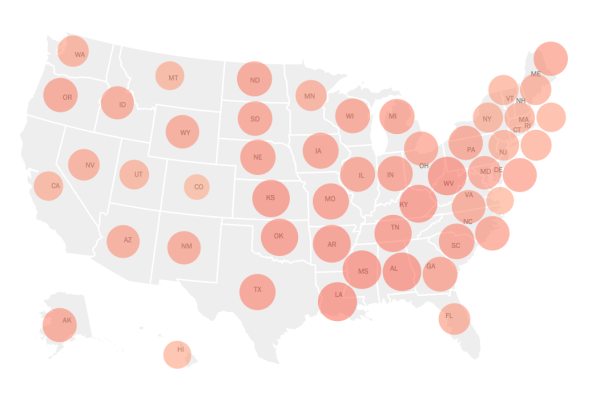 See How America Has Gotten More Obese in the Past 25 Years
Next Up: Editor's Pick