On Nov. 20, 1969, a group of Native American activists landed on Alcatraz Island. It wasn’t the first time they had done so, but this time it stuck: they began an occupation of the island that lasted for more than a year.

As Roxanne Dunbar-Ortiz wrote when she nominated that day as a moment that changed America, the occupation was not the beginning of organization and protest among the Native American population, but that action caught the eye of the world. Though activism among indigenous populations had been growing throughout the 1960s, just as movements for the rights of African Americans and women did, Alcatraz “grabbed world-wide media attention.”

Sure enough, that anger and activism was the subject of a Feb. 1970 TIME cover story that, while it did not entirely avoid indulging in stereotype, acknowledged that the prejudice that Americans experienced at that time was “as painful a fact to Indians as it is to blacks” and that “Indians suffer just as harshly from biased history books.” As the story noted, textbooks used in American schools at the time portrayed indigenous people as mentally “deadened” and treated the coming of the Pilgrims as a purely positive step for everyone involved.

One of the men at Alcatraz was John Trudell, the late activist and artist who, during the occupation, served as a spokesperson for the group. Trudell was then a chairman of the American Indian Movement during a portion of the 1970s.

And one of the people who was watching would be the mother of a man who now goes by the name Bear Witness, as a member of the Canadian First Nations DJ group A Tribe Called Red. “I was raised in a highly politicized environment. My mom left home at 16 to join the American Indian Movement,” says Bear Witness. “One of the things that she brought [to my upbringing] was not only the politics of that whole movement, but also the things that grew out of it — and one of the things that grew out of it was John’s poetry and John’s music.”

Though Bear Witness says that “in the U.S., if you’re in Indian country, people definitely know the name John Trudell,” he notes that the Alcatraz action is still what Trudell is perhaps most famous for: “It was so visible. It was something that was in the face of an urban center, taking over public space within the urban domain. That was a huge statement, especially at that time, when schools were still teaching that native people had been wiped out. To take a highly visible stand was such a needed thing.”

And yet, in his later years, he concentrated on writing and music. TIME.com is now officially premiering the lyric video for the new ATCR song “ALie Nation” (from the album We Are The Halluci Nation, out Sept. 16) which features poetry by Trudell, who began working with the group before his death last year:

Read the full 1970 cover story about the American Indian Movement, here in the TIME Vault: Starting Down the Protest Trail 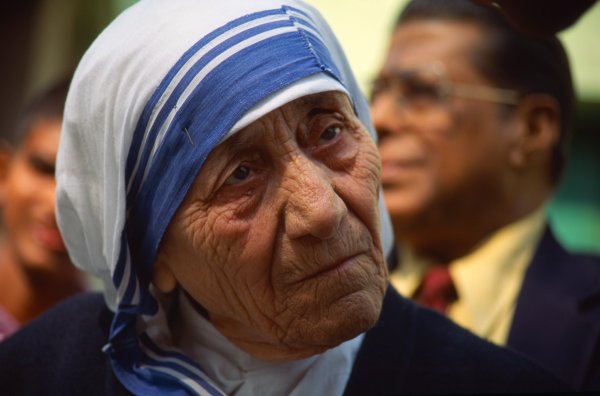 A Brief History of Mother Teresa's Complicated Faith
Next Up: Editor's Pick