The cover of US publisher Marvel's comic book, featuring Canadian Prime Minister Justin Trudeau as a super hero in front of a newstand in Montreal, Canada on Aug. 31, 2016. Canadian Prime Minister Justin Trudeau takes the role of a superhero in a comic book by US publisher Marvel released on newsstands August 31 in Canada. Trudeau appears smiling in a corner of a boxing ring on the cover of the comic book, a limited edition in English of the series "Civil War II: Choosing Sides" wearing a maple leaf shirt. / AFP / Marc BRAIBANT / TO GO WITH AFP STORY BY MARC BRAIBANT (Photo credit should read MARC BRAIBANT/AFP/Getty Images)
MARC BRAIBANT—AFP/Getty Images
By Abigail Abrams

In case you haven’t gotten enough of Justin Trudeau lately, there is now a way to memorialize the beloved Canadian prime minister.

Featured on the variant cover of issue No. 5, the 44-year-old prime minister is shown sitting in a boxing ring and wearing a tank top emblazoned with a maple leaf. Behind him are Puck, Sasquatch and Aurora, members of Canadian superhero team Alpha Flight, with Iron Man in the left corner, according to the Toronto Star.

Perhaps the only disappointing thing about the new comic? No shirtless sketches of Trudeau. Toronto-based cartoonist Ramon Perez, who is behind the Trudeau depiction, told NPR his original draft did feature a bare-chested Trudeau, but Marvel thought the move might be too risqué.

The story centers around a new character named Ulysses who can see into the future, and the Alpha Flight squad is divided over whether to use the information to arrest potential criminals, according to NPR. But for more details, fans will just have to pick up the issue. 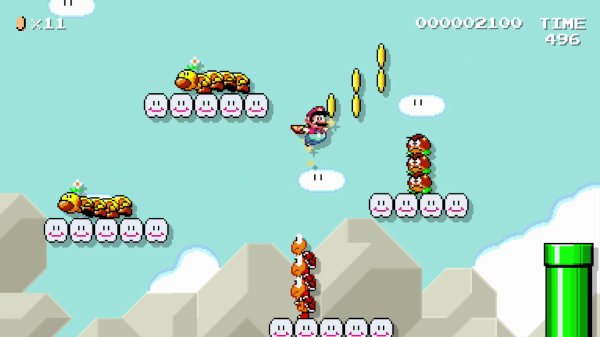 'Super Mario Maker' Is Coming to the Nintendo 3DS This Year
Next Up: Editor's Pick